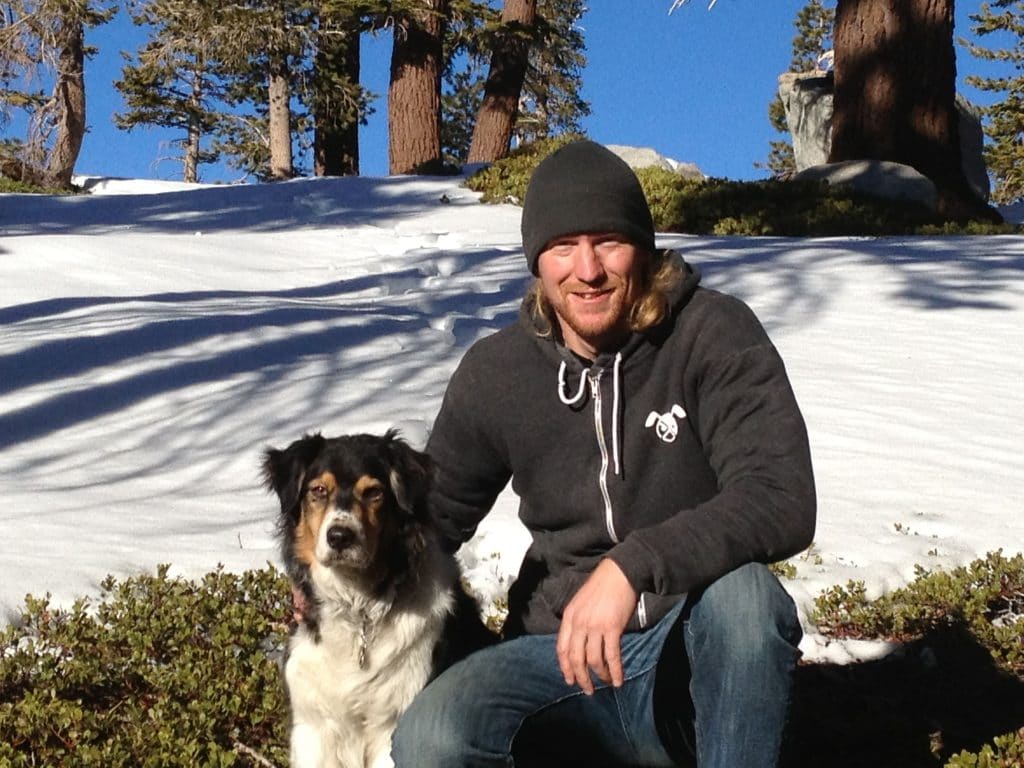 In 2009, Dempsey adopted the Aussie Shepherd from a friend who could no longer take care of him. The lovable dog lived up to his name, chewing up leather couches, the sides of walls, and his leashes.

“I was getting into climbing and I had an old climbing rope and I just started making leashes for him and my friends’ dogs,” Dempsey, 40, told The Dog People. “People kept asking for them and I thought of the idea of recycling the ropes and donating back to animal rescues.”

Rascal used to chew up his leashes, which inspired Ryan Dempsey to start Ropes for Rescues. Photo courtesy of Ryan Dempsey

In 2012, Dempsey founded the company Dog Patch SF and its charitable program, Ropes for Rescues. Whenever a climber, climbing gym, retail store, or other organization donates used ropes, Dempsey donates 10 percent of the leashes made from the rope to the nonprofit of their choice—which is often an animal shelter or rescue.

Dempsey began selling his leashes—some made of rope donated by his own climbing gym, Touchstone Climbing—at a booth outside the San Francisco Ferry Building, often talking with hundreds of people a day. Rascal joined him at the booth, hogging a comfy padded chair while Dempsey perched on the armrest.

Word of mouth quickly spread. Upcycling the ropes not only makes for durable leashes, but keeps the ropes—which are made of nylon, a plastic product—out of landfills.

“A lot of climbers have their ropes still in their garage and they’ll use part of the rope for tie downs and stuff like that. But the average rope is 60 meters, which is just shy of 200 feet. So it’s not a very practical length of rope,” Dempsey said. “There’s other ways of using the rope, but this just seems like an obviously beneficial use to breathe new life into this material.” 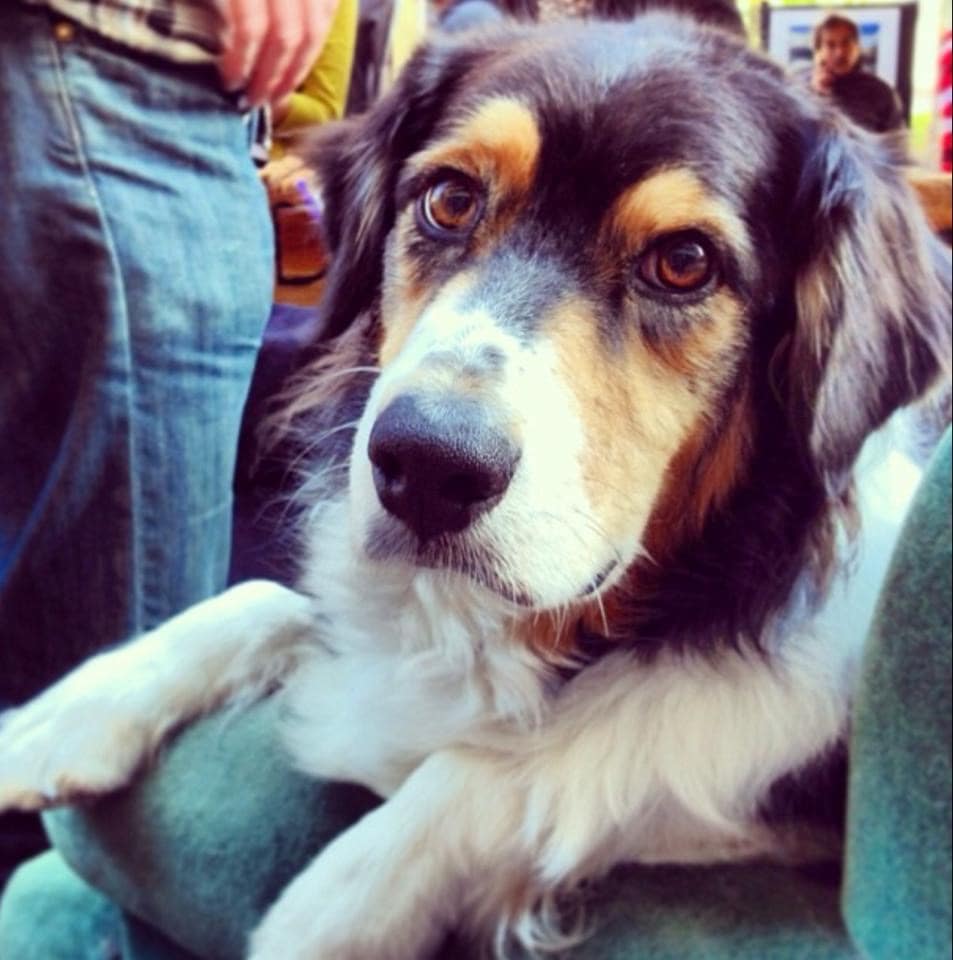 Customers who buy a leash receive a little note about the name of the climber who donated the rope, where they climbed with it, and the nonprofit they’ve chosen to support through Ropes for Rescues. When big name climbers donate, the cost of the leashes rises to $100, with $50 donated to their favorite charity.

Some of the biggest climbers in the world have donated rope, Dempsey said, including Tommy Caldwell, who was featured in the documentary “The Dawn Wall”; Lynn Hill, the first person to make a free ascent of “The Nose” of Yosemite’s El Capitan; Conrad Anker, team leader of The North Face climbing team for 26 years; and Royal Robbins, a rock-climbing pioneer, who donated a rope to Dog Patch SF before he passed away in 2017.

“The rest of his ropes are actually going to museums because he’s one of the founding fathers of Yosemite climbing,” Dempsey said. “It’s almost like chopping up Babe Ruth’s baseball bats to make coasters.” 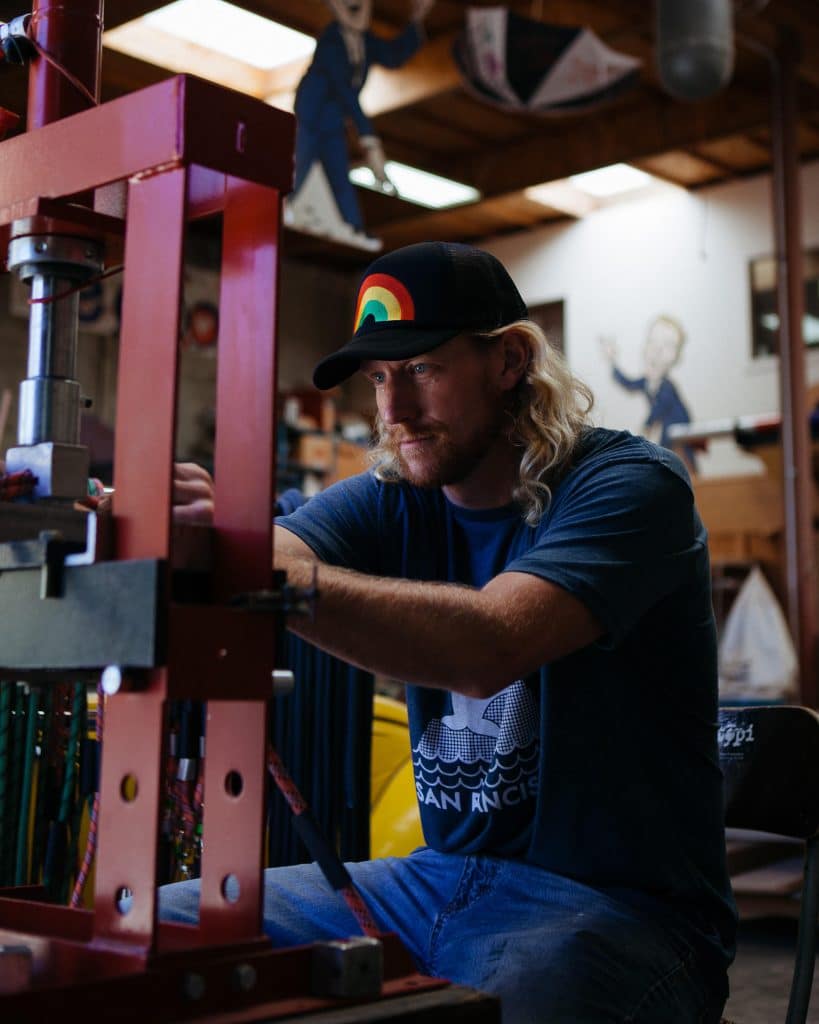 From the Ground Up

Without a penny spent on marketing, Ropes for Rescues has donated to over 300 animal rescue organizations in the United States and abroad, including Indonesia, Ecuador, Slovakia, New Zealand, and Turkey. Every beneficiary is listed on the “Community and Rescues” page of the Dog Patch SF website.

“We list state by state and country by country the rescues that we donate to,” he said. “So it also works as a reference point if somebody’s looking to adopt a dog—they can follow the live links to that rescue near them.” 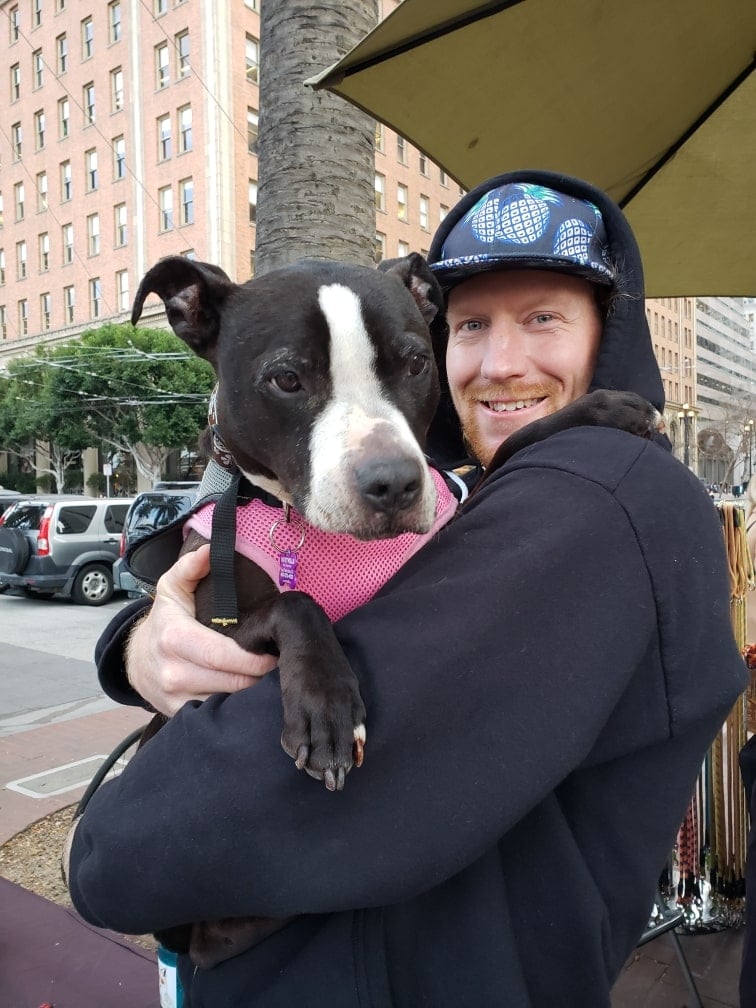 Ryan Demspey loves his “foster fail,” Oona. “As far as dogs and companionship, they just bring so much love into your life that isn’t equivalent to many other things,” he told The Dog People. Photo courtesy of Ryan Dempsey

For the Love of Mutts

When Rascal eventually passed away, Dempsey went several years without a dog of his own. But he visited Muttville Senior Dog Rescue in San Francisco nearly every week, and fostered six dogs for the nonprofit.

In February of 2020, he adopted his seventh foster, a 10-year-old Pit Bull named Oona. She still has some pep in her step, and easily walks a mile with Dempsey to hang out in his booth, happily greeting other dogs and people.

“She’s just a sweet old girl,” he said. “Her best trick is if you say, ‘Kisses,’ you better be prepared because she will lick your face until you have to push her off.” 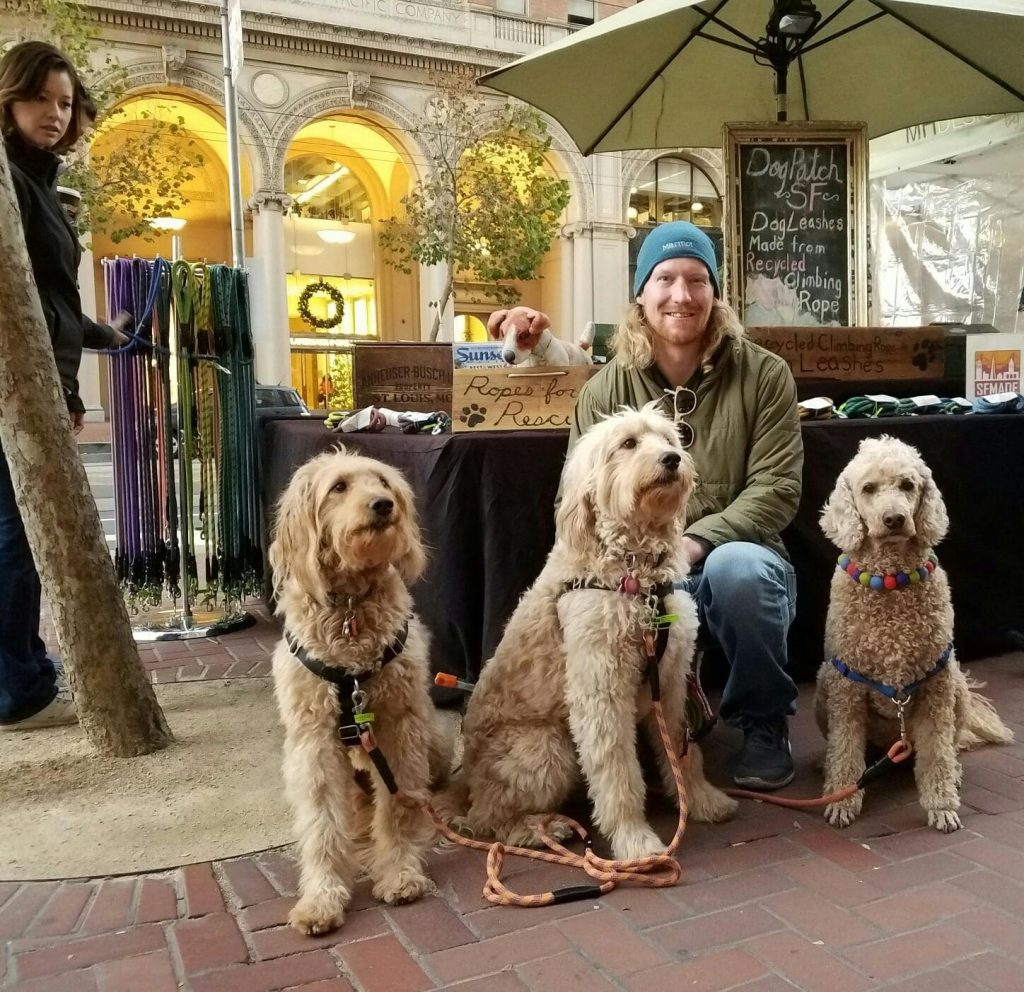 Ryan Dempsey enjoys meeting dogs who visit the Dog Patch SF booth near the San Francisco Ferry Building. There’s no firm schedule since he also hosts booths at shows, so the best way to purchase a leash is through the Ropes for Rescues website. Photo courtesy of Ryan Dempsey

He also donates leashes to Muttville whenever a climber doesn’t specify a nonprofit, and online customers can opt to donate a leash to the organization as well.

Sherri Franklin, founder of Muttville, said it’s “like Christmas” whenever Dempsey arrives with donations and to visit the dogs.

“I love Ryan,” she told The Dog People. “He is like the Pied Piper: people and dogs follow him. I like to say Muttville is giving senior dogs a second chance, and he is giving these climbing ropes a second chance. What a bright idea! They are so strong and great for all kinds of dogs. They help the environment on top of that.” 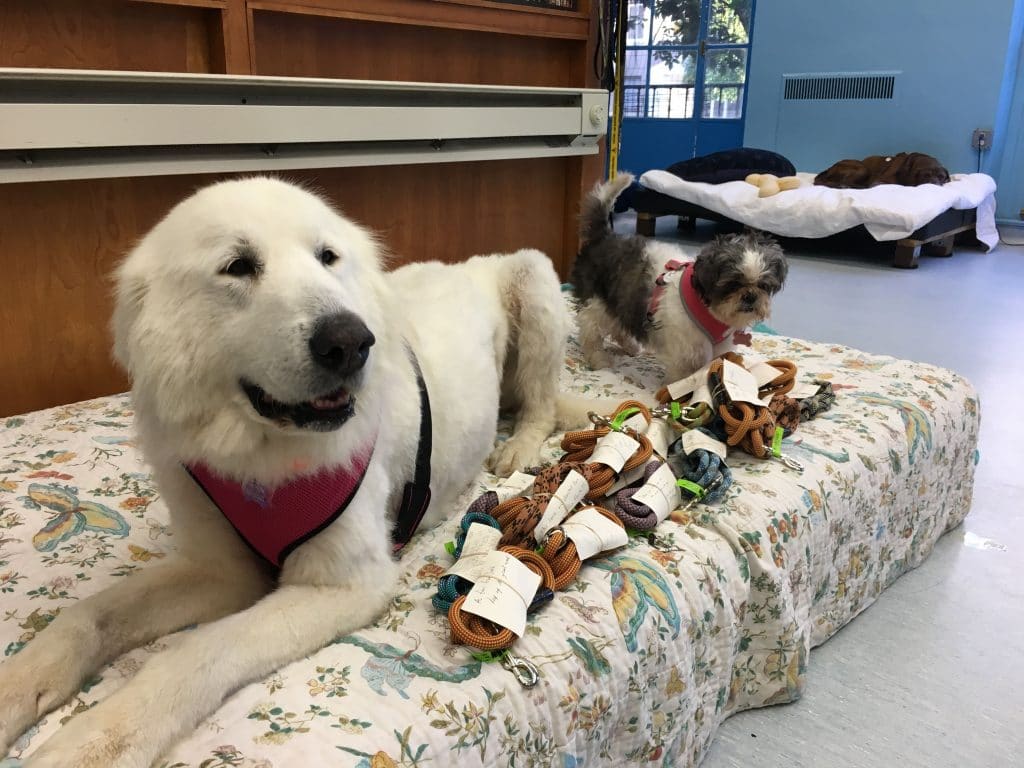 Dempsey, who once worked in the bar and restaurant industry, has no regrets about leaving that world to dedicate “my life to making dog products that are beneficial for our dogs, our animal rescue community and our environment,” he wrote on the Dog Patch SF website.

Now that he’s hit his goal of donating to at least 300 rescues as a “one-man show,” he plans to finally hire help and continue expanding to create other products that give back to animals.

“It’s been very rewarding,” he said. “I couldn’t have asked for anything more.”

For more information, to purchase products, to donate used climbing rope, or for a list of drop-off locations in the Bay Area, visit Ropes for Rescues or follow them on Facebook.