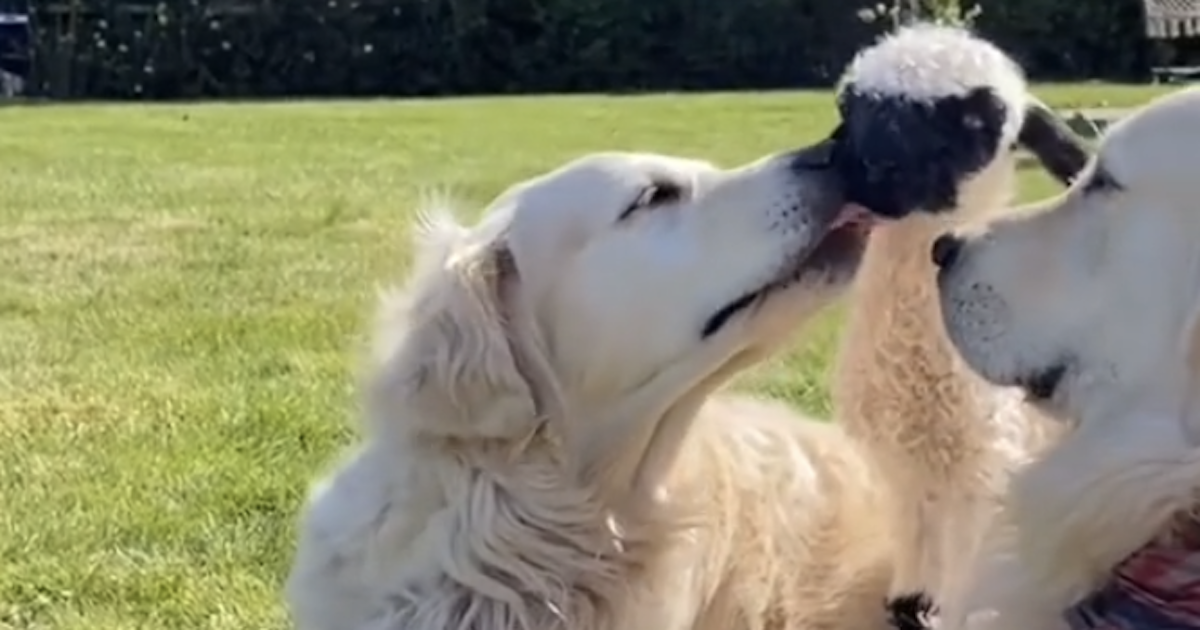 Benny the Lamb, also known as Bennedict CurlyPatch, thinks he’s a puppy. That’s because his birth mother rejected him, so a Golden Retriever named Lily stepped up to adopt him. They might look like an unusual pair, but they are incredibly happy together.

Videos of Benny and Lily’s relationship have gone viral. She helped the little sheep get over the rejection from his own kind, which is a heartwarming and beautiful thing. Followers hope that this mother and son duo will remain close for the rest of their lives.

By nature, sheep usually only care for two lambs at a time. So, when Benny’s biological mother gave birth to three, she kept the two bigger lambs and rejected Benny. Benny was heartbroken, but his humans say that it’s not the mother’s fault.

Going through that heartbreak brought Benny to his new mom though. His humans have three Golden Retrievers: Lily, Boris, and Darcy. Lily is the mom of the group, so when she saw a baby in need, she rushed to help. It didn’t matter to her that Benny is a different species. Benny’s story proves that love is what defines family, not DNA.

“Lily still loves cleaning Benny, wrestling with him and she always watches over him. If someone’s too rough near him or mama sheep comes over to push him away, Lily will get in the way,” wrote Lily’s family.

Lily and Benny’s human family turned to Instagram and TikTok to share videos of the two. It’s no surprise that the internet quickly fell in love with this adorable pair.

Lamb in a Dog World

By being around dogs so much, Benny started to pick up on dog behaviors. He follows them, plays with them, and even cuddles with them. He sometimes gets to play with the other lambs, but he seems happiest with his canine family. This little lamb might even think he’s a dog now!

“When he’s a little older, he’s going to join us on dog walks with his doggo flock. Our neighbors are going to think we’re completely [nut]s but I really don’t care,” Benny’s human said.

Benny’s humans couldn’t bear to see the lamb upset after the sheep rejected him. So, they’re grateful that Lily took him in and showed him what love is like.

“Thank you Lily for showing Benny he is NOT alone and that he IS loved. He really needed a new mummy. He is now thriving with you by his side,” the family wrote.

Lily’s social media pages will continue to share video updates on Benny’s progress. It looks like he has truly found his place among the Golden Retrievers, so he has a lifetime of love and happiness ahead of him.