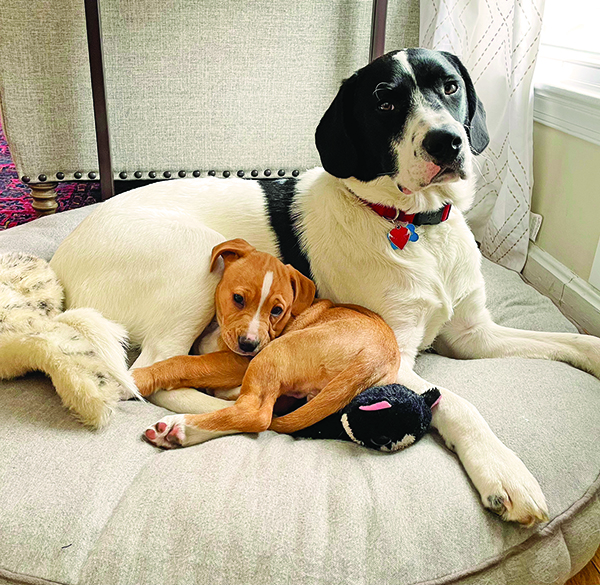 Sheesh, I thought my dog would love having a new friend, but he is being so mean to the new little puppy!”

I hear this all the time from shocked owners. But what’s surprising to me is not the resident dog’s behavior. It is the fact that the humans in question had an expectation of immediate bliss.

Sure, this can happen sometimes – particularly if the current dog is very young and absolutely lives for playdates with his neighborhood friends. Then the arrival of a new puppy might elicit one of those “You complete me!” moments worthy of TikTok, YouTube, and Instagram.

But that instant-friend scenario should not be any dog owner’s going-in assumption. To understand why, let’s try a little thought experiment: How would you feel if your parents decided that you needed a new best friend? And then …

• By the way, it turns out their idea of a great friend for you is a toddler! What the heck?! This isn’t play, it’s babysitting. And it’s exhausting and boring at the same time.

• Plus, the best parts of your day have disappeared because your parents are so absorbed with the new kid.

• Furthermore, you’re apparently supposed to allow the weird toddler to climb all over you until you’re bruised and to let him take your stuff until it’s ruined.

• The heartbreaking final straw: When you accept the babysitting situation and actually try to teach the toddler good manners, your parents are mad at you all the time, saying, “Don’t be so mean!”

See? We should not be amazed when our dog is not immediately thrilled with the new puppy.

Typically, on the day a new puppy is brought home, resident dogs are anywhere from a little unsure to definitely not in favor. Don’t worry yet! There will likely be incremental progress every day. While there are some sad cases where an adult dog cannot accept a puppy even when you’re doing everything right, in my experience, most of the time, by Week 3 things have settled nicely.

This is not to say that I agree with the advice, commonly given to folks whose older dog is not enjoying the new puppy, to “just let them work it out.” Ugh. When there are half a dozen easy things we can do to smooth the beginning of that hoped-for friendship, why in the world would we subject our two supposedly beloved dogs to the fear, sadness, and frustration of working it out themselves?

Here’s how you can ease the transition for your older dog, create a safer, more developmentally positive scenario for your puppy, and increase the odds that the two will very quickly become real friends.

1. Manage the environment so that puppy contact is always optional. An older dog should never be forced to hang out with a puppy. Use gates, crates, benches, and whatever else you have to create a situation where your older dog can always escape and head to a peaceful “adult swim” scenario elsewhere in the house.

Puppies can be rude. For your dog, playing with a puppy is not the same as playing with a fun adult dog. While some dogs are incredibly tolerant of all of the mouthing and jumping – and even seem to relish the babysitting job – others are understandably horrified at first. If you trap your adult dog with the puppy, you are asking too much. Your dog will be stressed and sad, and your puppy may end up hurt.

Note that some of the most puppy-friendly adult dogs can be a little overwhelming to new puppies, so the “no forcing” advice goes both ways. Make sure a little puppy has a few easy retreats – perhaps under couches and chairs – so that the puppy also has a chance to opt in or out depending on comfort level. Let them both choose all of this at their own pace. (Note that it may not be your preferred pace!)

2. Let your adult dog growl. I cringe when I hear people instructing their older dog, “Shadow, be nice!” in a threatening tone. Shadow is being nice by agreeing to hang out with this toddler! The least you can do is give him the tools he needs to teach the puppy some important lessons.

The fastest way to convince an older dog that this puppy really is an awful turn of events is to pair the puppy’s presence with the feeling that he is constantly on the verge of being in trouble: “Whenever I interact with that puppy, Mom gets mad at me.”

If you have, ill-advisedly, trapped your older dog with the puppy, then the resulting growls and snaps could, in fact, be dangerous. However, if you have made interacting optional, then you know that Shadow has actually chosen to be with the puppy. In that case, his growl, and that scary-looking little snap/snarl, are part of healthy boundary-setting. It may look worrisome to you, but Shadow’s good-manners lessons will end up keeping the puppy safer with other dogs in the long run.

So here’s what to say instead of threatening your dog to “Be nice!” when you hear him growl. How about saying, “Good job, Shadow! Thank you.” When your adult dog feels your support, he’s going to be even more solid in his interactions with this pup.

3. Don’t change your dog’s best stuff. When people adopt a new puppy (or for that matter, welcome a new baby into the home), they know that it’s going to be a week or two of total disruption. They are sure that eventually normalcy will return.

You know who doesn’t know that? The resident dog. So the very kindest thing you can do is to identify your dog’s top three things in life and make sure they are undisturbed by the arrival of the interloper. Is it the morning walk with Dad? The after-work game of fetch with Mom? The daily playdate with Rover across the street? Whatever your dog loves best, leave those cornerstones of a happy life in place when the puppy arrives. If the puppy is paired with Shadow’s loss of his very favorite things, how do you think he’ll feel about the puppy? Giving your dog stability will help him be at his generous best with the new puppy.

4. Exhaust your puppy elsewhere. Most of the time, the new puppy’s very favorite thing will be the resident dog. As flattering as that may look, it is very hard to be the constant recipient of that much enthusiastically rendered physical love all day long.

Do your dog a favor and find some other friends for your puppy to adore. Ideally, there is another puppy right up the street, and a few times a week you can take all of those sharp teeth and the wild jumping and pair it with a like-minded buddy. If you’ve planned ahead, you may have already reserved space in your local force-free trainer’s puppy kindergarten classes or puppy socials. You know what happens next? You get to bring home a very chill puppy, who might suddenly strike your older dog as kind of a nice kid.

5. Two dogs = Duck! Fish! Feta! Finally, start to create some fun new experiences for your dog that only happen near the puppy. Find a treat that you’ve never given to your dog before. Maybe it’s those dried fish cubes at the pet store. Maybe it’s the feta cheese in your fridge. Whatever it is, bring it out a few times a day and give it to both dogs only when they’re together. Voilà! Even if your dog isn’t yet actually enjoying the company of the puppy, at least here’s a reason to want to be near the toddler every now and then.

TWO IS A MAGIC NUMBER

Most of the time, two dogs really are more fun than one. Folks who’ve lived amid a doggy friendship witness so much mutual joy that it’s hard for them to imagine having one dog at a time. The thing is, we humans have a tendency to jump ahead. We get that puppy and immediately envision the end game – forgetting to focus on how to get there. As a result, our trusted old friend and our brand new one have to go through a rocky first phase. The whole house is stressed.

It doesn’t have to be that way. Just a little empathy combined with a solid initial plan can create a beautifully calm on-ramp to what may well be that dream friendship.

Best of Funny Dogs 🐶 The most hilarious pooches on the internet!
Dog Was Dumped At Rescue Deaf And Unable To Walk, Now He’s Found A Forever Family
How to Identify Tick Bites
The Funniest Dog Reactions Ever | Funny Pets Videos Compilation
Best Compilation of Funny & Cute DOG Videos! 🐶🐕