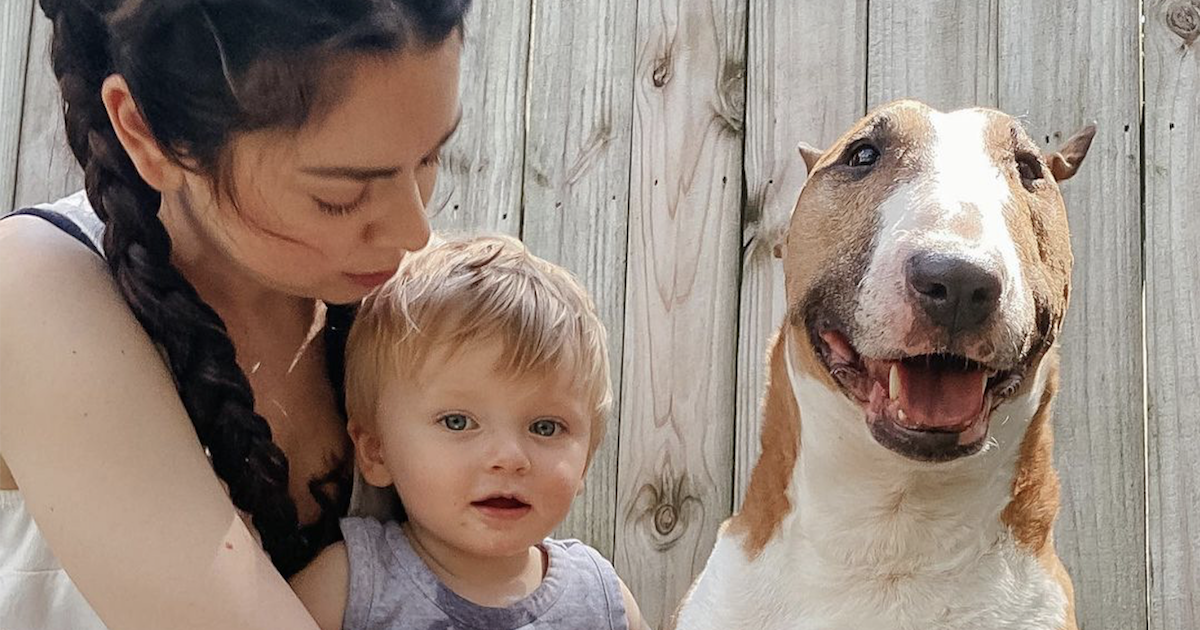 When dogs are introduced to new babies in the family, it can be a tough transition. Kids don’t know how to give dogs space. And dogs can become overwhelmed when having to share your love with a human child. Sadly, these situations can lead to a dog becoming aggressive around the child.

YouTuber Nikki Phillippi and her husband faced a similar situation with their Bull Terrier Bowser and their human son Logan. After Bowser bit Logan, the couple chose to euthanize him because he was “aggressive” and “too old to be rehomed.” The news sparked outrage among her fans.

Coming to a Difficult Decision

Phillippi explained that Bowser had a history of aggressive behaviors. He was attacked by another dog as a puppy, and he wasn’t the same after. The couple rarely brought him out in public for fear that something bad would happen. They admitted that they’d considered euthanizing him before, but didn’t mention anything about rehoming him or hiring a trainer.

When the couple had their first son, Bowser’s behaviors were extra troublesome. Most of the time, the pup was fine with Logan. The two would play and cuddle together. Yet, Bowser would sometimes get defensive if Logan came near his food or got in his space too much. It’s common for dogs to want space from children, though.

One day, Bowser bit Logan’s face because he stole food from the dog. Phillippi said it was a minor injury but left a small mark. The family considered their options for a while, but ultimately decided to euthanize him. They said they contacted the shelter and were told that it would be too hard to rehome him. Bowser was 9 years old, so he was very bonded to his humans. Phillippi also claimed that he would still be their liability in a new home.

So, the couple hired someone to come to the house and put him down. It was a heartbreaking moment for them, but they felt they did the right thing.

However, many of Phillippi’s fans strongly disagreed with her decision. She explained the situation on Instagram, and then posted a lengthy YouTube video defending her choice further. While there are some instances where dogs need to be euthanized for behaviors, fans agreed that this wasn’t one of them.

With so many followers, fans believed that it would’ve been easy for her to reach out for help to find quality training or a more suitable home for the dog. After all, dogs much older than Bowser have been surrendered and found loving homes before.

Another fact that alarmed fans was that Phillippi said in her video that Logan was always following Bowser around, grabbing him, and getting in his space. She claimed that he was too young to know any better. But comments questioned why Phillippi didn’t separate Bowser from Logan to prevent this. She knew Bowser had aggressive behaviors even before Logan was born. Fans were also upset that she was speaking publicly about something so controversial and harmful.

“Even if you made that horrific decision, please do not post about it to hundreds of thousands of followers because you are normalizing the idea that putting a dog down because of aggression issues that YOU did not address is a feasible option,” one commenter pointed out.

But sadly, we can’t undo the past. Bowser is no longer with us, which is heartbreaking for his family. Phillippi and her husband might’ve jumped to the worst possible conclusion too quickly, but they can’t change what happened, and arguing with them won’t bring Bowser back. Plenty of celebrities have successfully trained or rehomed aggressive dogs, so it is possible in most scenarios. Hopefully, all dog parents who heard this news will be extra cautious if faced with a situation like this.