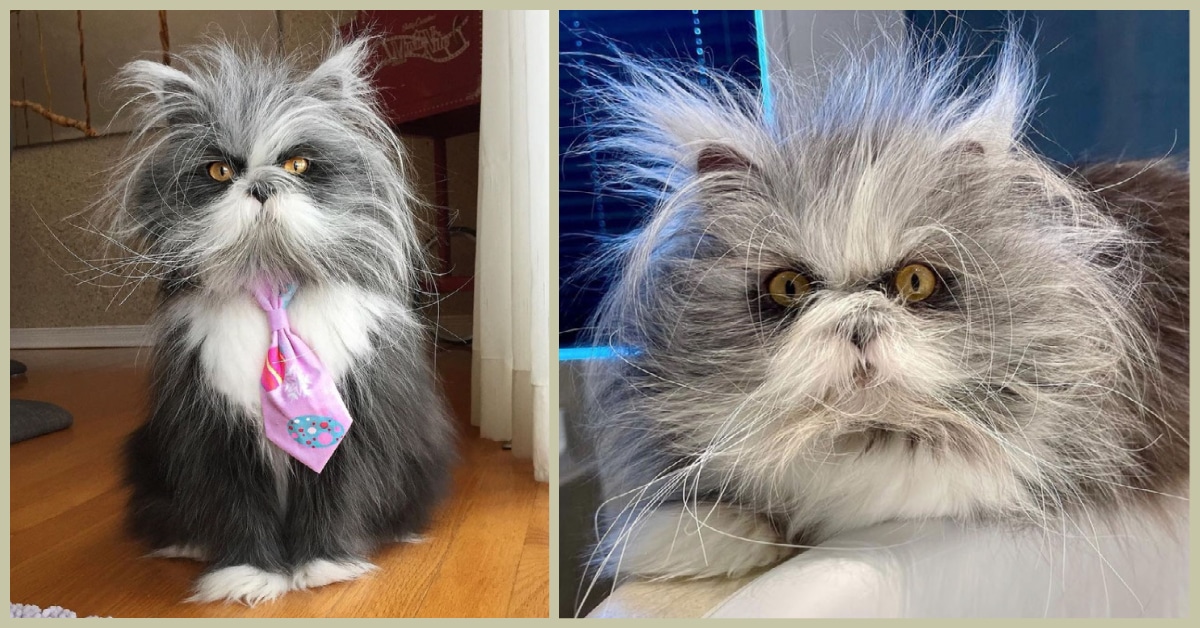 It’s a dark night in Canada. You’re out for a walk near the woods when suddenly, you see two glowing eyes peering at you from beyond the treeline. You brace yourself for an ear-piercing howl—and then suddenly you hear a quiet meow, and a small hairy cat trots out from the forest. You’ve just met Atchoum, the smallest werewolf in Canada. His name translates to “sneeze” in English.

OK, so six-year-old Atchoum the Persian isn’t actually a werewolf (and probably isn’t allowed out in the woods at night), but he is an Instagram and TikTok sensation from Quebec—and he does have a disorder known as werewolf syndrome (you can read more about it here). Atchoum’s wispy white and gray hair cascades out from his body, giving him an exceptional handlebar mustache on his smoosh-face, a long-haired tuxedo-suit body, and two practically glowing amber eyes peeking out from beneath all the fur. It sounds cute—and it is—but all that extra fluff is because of a disorder called hypertrichosis.

Hypertrichosis is the manifestation of a hormonal imbalance that causes invasive hair growth all over the body. It can happen to both people and animals, and Atchoum has the most severe form, called Ambras Syndrome. The hallmarks are long, silky hair; a hardened face; and abnormalities in the face, teeth, and claws. Because of this, Atchoum’s mom Nathalie Côté actually had to declaw him for his own safety.

“Atchoum’s claws were non-retractable and were so thick and deformed that it would have seriously injured him,” Côté said. They had to be removed “so that he could walk normally and without pain.”

Ultimately, this was a good decision; one of Atchoum’s brothers also has hypertrichosis, and his paw pads got so infected from his claws that he needed urgent surgery.

Atchoum’s disorder doesn’t get him down, though. Côté said he’s shy around strangers, but when they’re at home, “Atchoum is a real clown,” both very playful and incredibly tender. “He’s such a loverboy to me,” she said. “Sometimes I tell myself that in another life we were in love.”

People are immediately drawn to Atchoum’s unique look, one Côté embellishes with very professional neckties and bowties that turn him into the cutest and sternest businessman look-alike on the planet. Or an old-fashioned barber, depending on how rumpled his mustache looks that day. And he’s a real ham for the camera, sprawling out on chairs or the bed, or sitting down in a majestic fluff on the countertop.

His social media presence happened by accident. Côté spent a lot of time posting pictures of Atchoum on her private Facebook page (“My teenage girls at the time found me really intense,” she said), until her husband joked that Atchoum should have his own page. She made one, and the likes came rolling in so fast they began to bet on how many Atchoum could get in a single day. Now he’s a social media sensation on every platform—mostly because people think he’s cute, but other times because someone thinks he’s ugly.

“Whether we like the appearance of Atchoum or not, he leaves no one indifferent,” Côté said. “I would tell people who don’t find him beautiful that if they could spend a single day with him, they wouldn’t see him the same way. He has the gift of making people fall in love with him!”