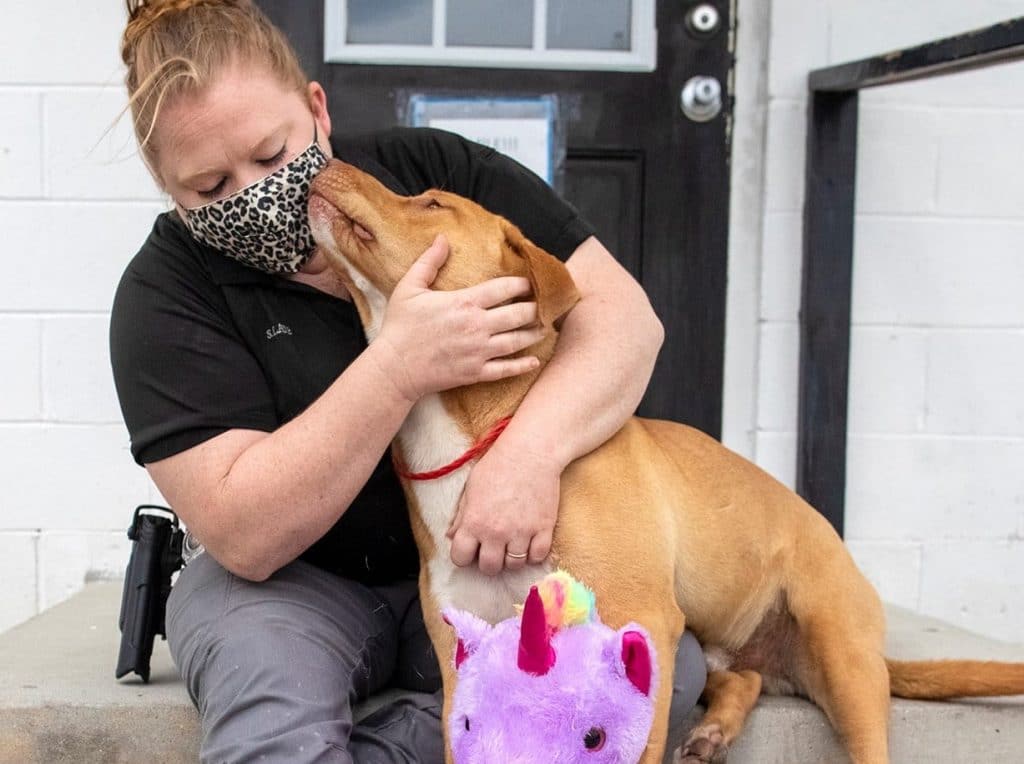 You’ve heard about stray dogs hitching a ride on public transportation, befriending hikers on trails, and trekking long distances to reunite with their owners. Now, joining the list of determined pets is Sisu, a stray who kept going to the Dollar General store to steal a purple unicorn toy.

On March 26 in Duplin County, North Carolina, an adorable Labrador mix with a dopey grin and a healthy dose of persistence became a local celebrity when he kept sauntering into the store, making a bee-line for a plush unicorn toy, and claiming it as his own. This precious dog’s gravitation towards the horned creature puzzled the staff, but they could tell he wanted more than the comfort of a soft, stuffed animal: He needed a loving home.

After repeated attempts to make off with the toy, an employee at the Kenansville store locked the sliding doors and called Duplin County Animal Services to get the sweet stray help. An officer named Samantha Lane was dispatched to the scene to apprehend the charming thief; seeing this giant dog cuddled up next to a kid’s toy inspired her to purchase the $10 toy for him. Once he got what he desired, the dog happily left the store with Lane.

“He was determined, he really wanted that unicorn,” said Officer Lane. “He came into the store five times in one day,” she added. She believes he previously had an owner with kids, given his propensity towards stuffed animals. However, during the time the dog remained at the animal shelter, no one came to claim him.

Upon arriving at the shelter, the one-year-old dog and his unicorn were inseparable. “This is what happens when you break into the Dollar General consistently to steal the purple unicorn that you laid claim to, but then get animal control called to lock you up for your B & E and larceny, but the officer purchases your item for you and brings it in with you,” a Facebook post on the Duplin County Animal Shelter page reads, with a picture of the dog resting his head on his cherished prize. Other social media posts show him snuggling with his new best friend, surrounded by staff at the shelter. 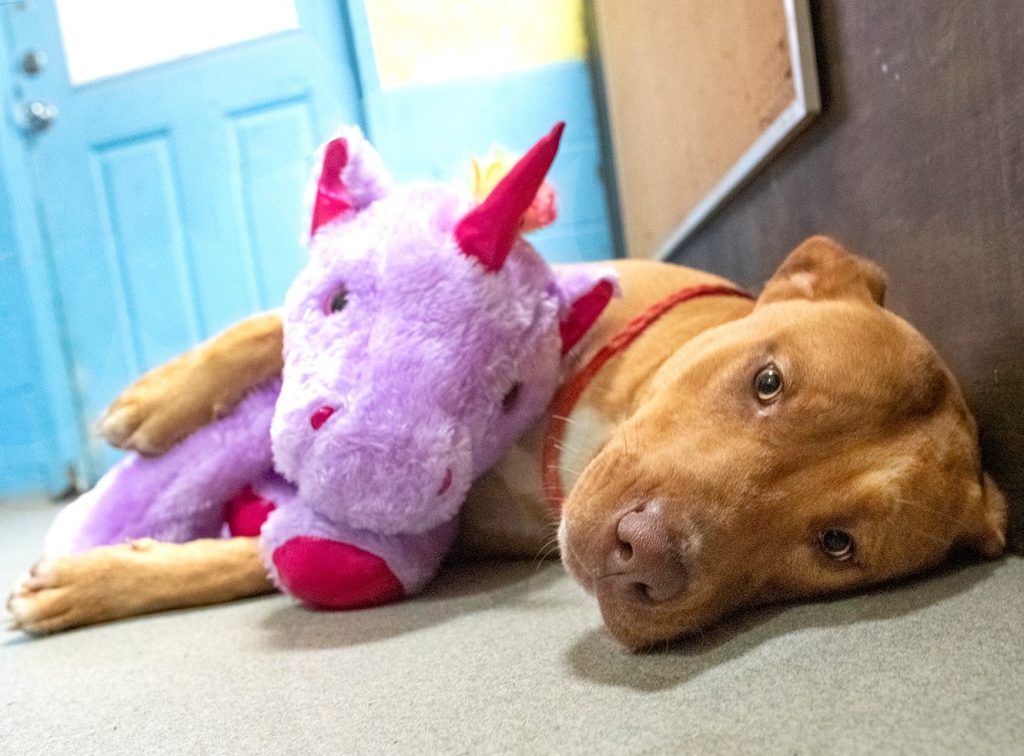 Sisu cuddling with his prized possession

The Duplin County animal control staff named the dog Sisu, after the dragon in Disney’s new animated film, Raya and the Last Dragon. Sisu is a male dog, weighs 67 pounds, and is full of love. The shelter put a hold on the dog for five days before releasing him to Lab Rescue LRCP, so he can be adopted. Lab Rescue LRCP is a non-profit volunteer organization dedicated to rescuing and finding forever homes for abused, neglected, and abandoned Labrador Retrievers in North Carolina and its neighboring states.

According to Sterrie Weaver of the rescue, Sisu is obedient, understands basic commands, and gets along with other dogs. And he’s also quite picky about his toy, too. He only cuddles with it when it’s clean. “What we are doing is, we are getting another unicorn, so one can be in the wash while he plays with another,” said Weaver. 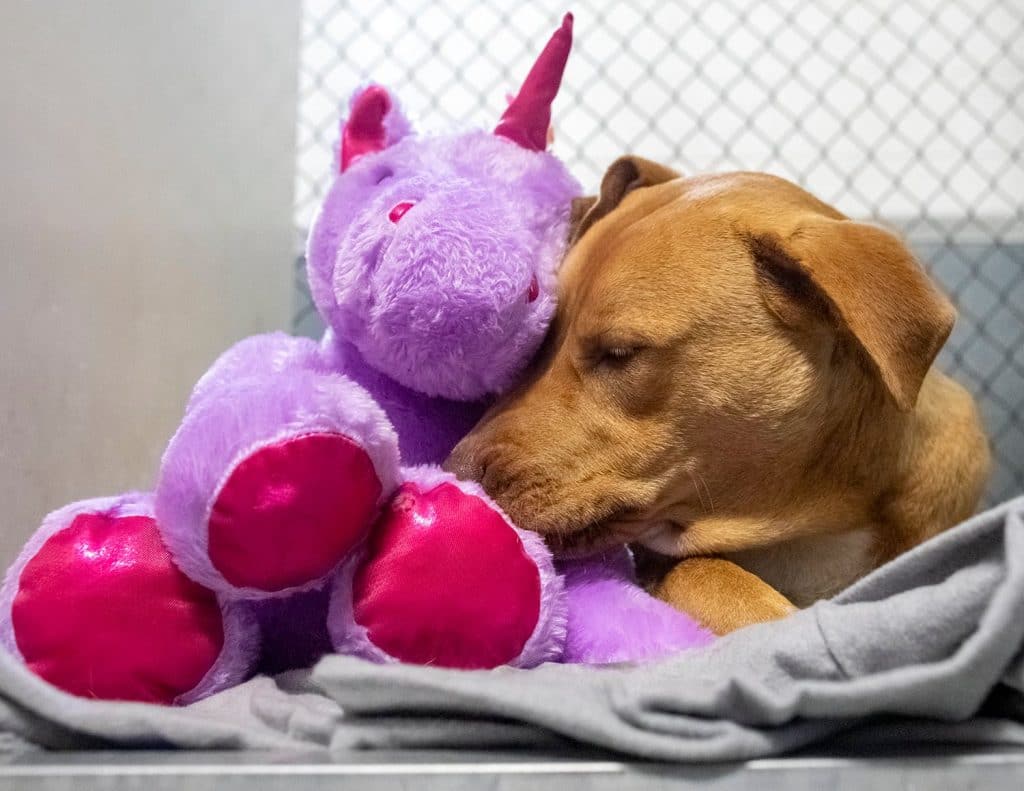 Sisu snuggles with his purple unicorn companion as he awaits adoption

As of the second week of April, Sisu has a number of adoption applications. “He was just neutered and I am going to train him a bit before adopting him out,” said Weaver. He’s confident he will get adopted this week. And the Dollar General is planning to send a few extra unicorns to the lucky family that gets to call this special dog their newest family member. 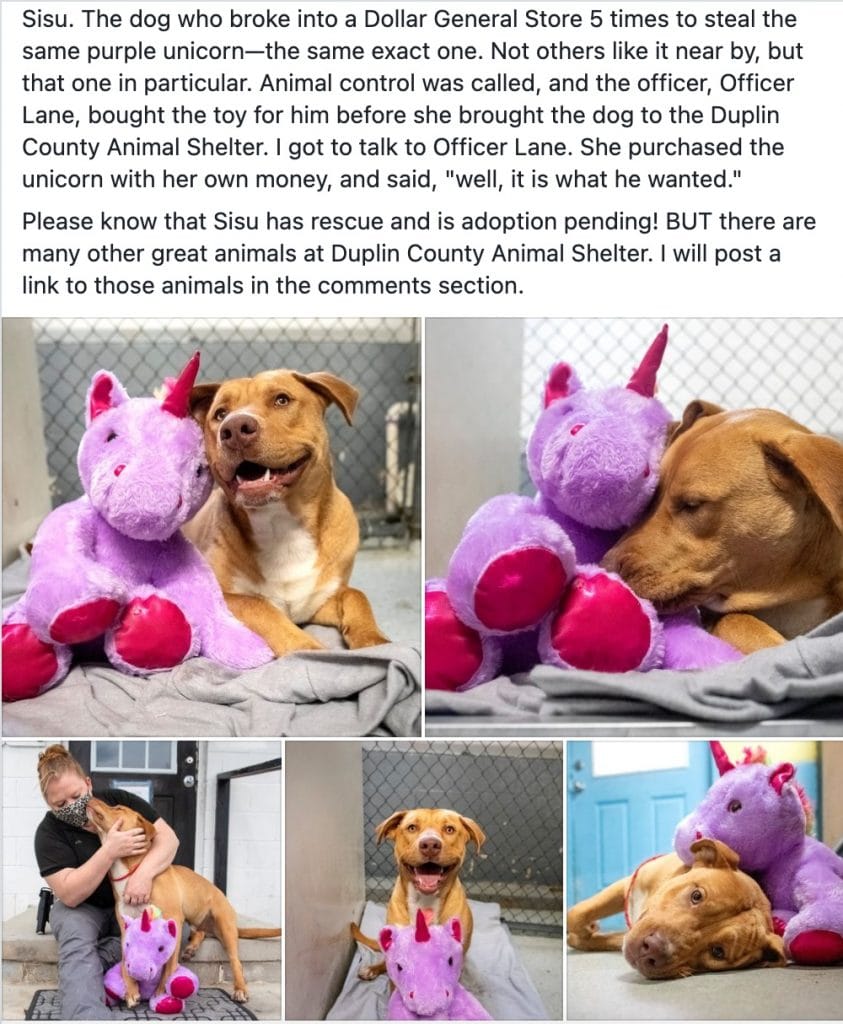