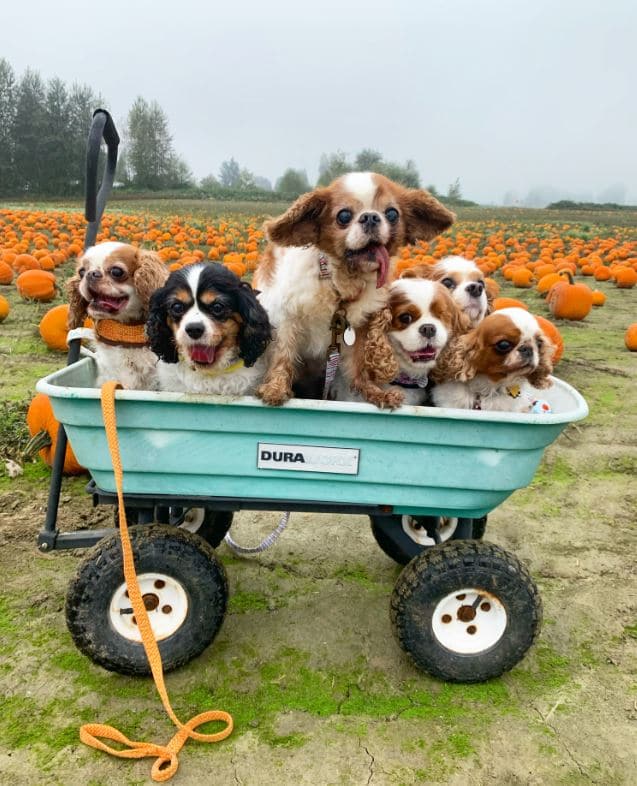 When The Beatles sang “Will you still need me, will you still feed me, When I’m sixty-four?” in their song “When I’m Sixty Four,” they could have been referring to some senior dogs who sometimes get a bad break.

Senior dogs are an extra-special kind of pet. They’ve lived long lives catching balls, gone on countless walks, marked a lot of territory, and sniffed many miles of ground. But sometimes they are discarded in their later years for a variety of reasons. While some are relinquished to shelters or find themselves homeless with no family to call their own, there is a special place called Old Dog Haven (ODH) that is dedicated to caring for these wonderful old, gray canines.

Banjo, standing, lives with a pack of Spaniels in his ODH Final Refuge home. Although most likely the oldest dog, he’s the most enthusiastic one. Photo by Peabody Johanson

“We feel that no dog should be abandoned and die alone but especially in their twilight years,” said Judith Piper, former executive director and current director of veterinary services and dog (and foster) manager at ODH, Oak Harbor, Washington.

“I decide which dogs we will take in, match them with a foster home, oversee their extensive medical care, and support the foster parents as they need help with the dogs,” Piper said.

An Offer to Help

Founded in 2004 by Piper and her husband Lee, Old Dog Haven is a small nonprofit that provides safe and loving foster homes for senior dogs who have been abandoned and also helps owners find homes for their seniors.

“Through a friend, Lee and I took in a few old dogs without other options and saw that someone needed to keep them from dying abandoned and alone in a shelter,” Piper said. “We had a little time and the room, and decided that ‘someone’ should be us.”

They had no idea of how much need there was. And, because of that the organization grew exponentially and now has 320 to 330 dogs who at any given time reside in permanent foster homes throughout western Washington. 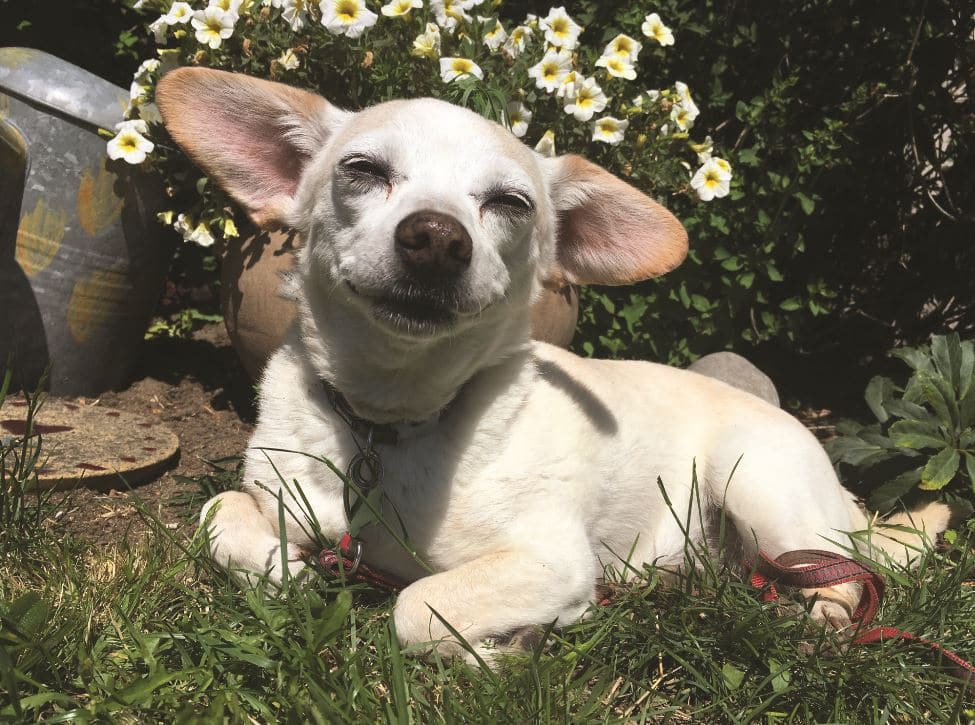 Murphy was adopted after being seen listed by another shelter on the ODH website. Photo by Joe Myers

The dogs ODH takes under its wing live in homes as members of a family. They do not live in a facility of any kind. Instead, they are placed in loving foster homes to live out the rest of their golden years.

ODH covers all of a dog’s medical costs, including medications, vet visits, and prescription food, etc. This allows people who may not have the funds but who have the love to give along with a cushy bed in a home to be able to take in a senior in need. “Our donors’ generosity over the years has been incredible, allowing us to continue,” Piper said.

During the earlier days of ODH, Piper was the only employee. Now the organization has grown and is one of the larger senior rescues in the country, according to Piper’s knowledge. The group has about 10 paid full- and part-time staff members, along with a corps of approximately 225-plus foster family volunteers, who are the backbone of ODH. 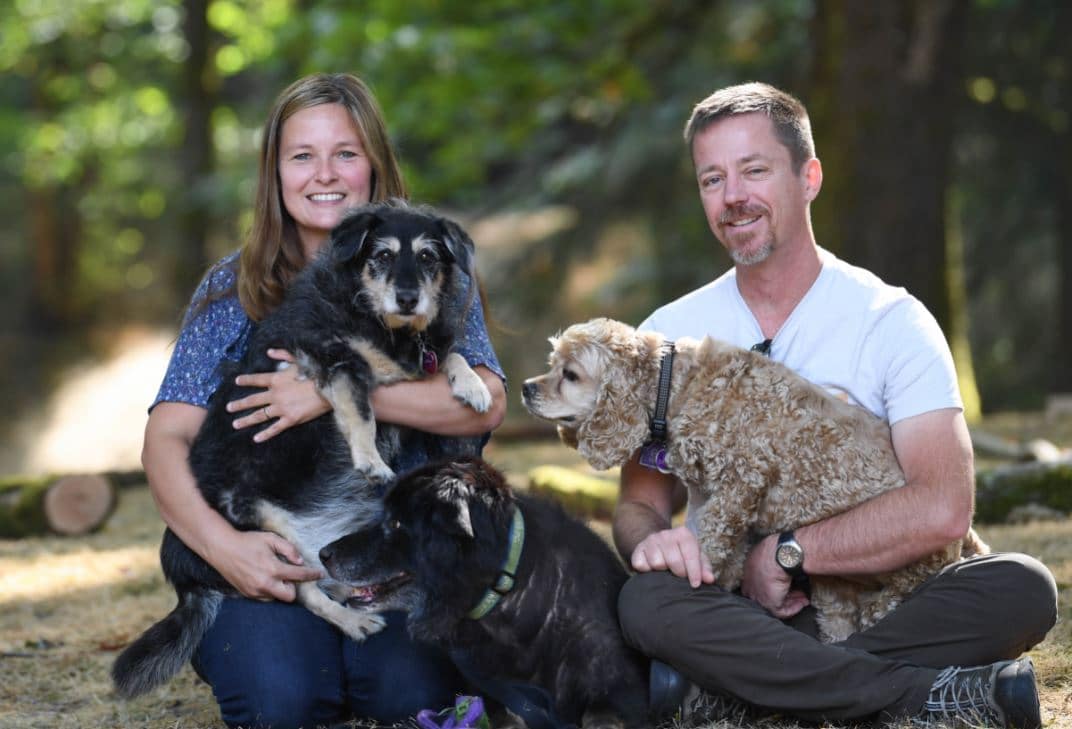 Matt and Sara Chaney have been ODH foster parents since 2013. Over the years they have had many ODH dogs and currently live on a farm with the dogs and other animals. Photo by Lara Gale

There are various reasons why senior dogs become homeless, according to Piper. Whether they become strays or are surrendered to a shelter, the reasons really haven’t changed much since ODH started in 2004:

Love and extra care is most needed during a dog’s senior years. So, it is especially difficult to adopt a senior dog once they are discarded.

Keeping Senior Dogs Out of Shelters

ODH offers advice to owners about planning ahead if they become unable to care for their dogs. Never assume that family members will take in your dog. It’s also important to make sure that someone knows where your dog’s vet records are and that there is someone available to take in your dog at least temporarily in case of an emergency.

“Check on your neighbors or relatives who have old dogs; make sure someone is watching over them,” Piper said. If you have elderly neighbors with dogs, help them by offering to walk their dog or take their dog to the groomer or vet. 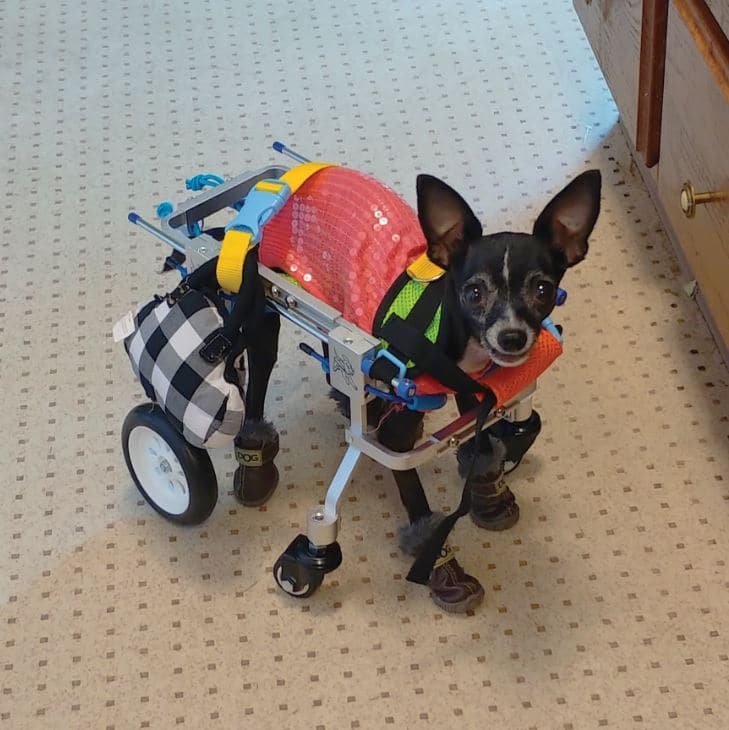 Former shelter dog Violet Rose was at first very thin and unable to use her legs in a coordinated way. She has since adapted to her cart and enjoys it. Her foster family loves her wonderful spirit. Photo by Erin Grace

It is much more difficult to find an adopter for older dogs in really bad condition. If you (or an owner you know) has a senior dog needing expensive medical care, start to look for help before it gets to crisis mode. “Most shelters will try to give care or find rescue for a dog with medical needs, but it’s far easier if the owner surrenders the dog along with their age, background, and any vet records available,” Piper said. “If the dog is turned in as a ‘stray’ (or just turned loose and picked up) it’s far more difficult.”

For owners who can no longer keep their senior dog, research rescue groups that might be able to help find an adopter. Never use Craigslist as the site has been used by unscrupulous people intending to harm dogs.

Do your homework, screen potential adopters thoroughly, and be honest about the dog’s behavior and medical condition. “You want a permanent adoption, not to have the dog bounced around again,” Piper said. 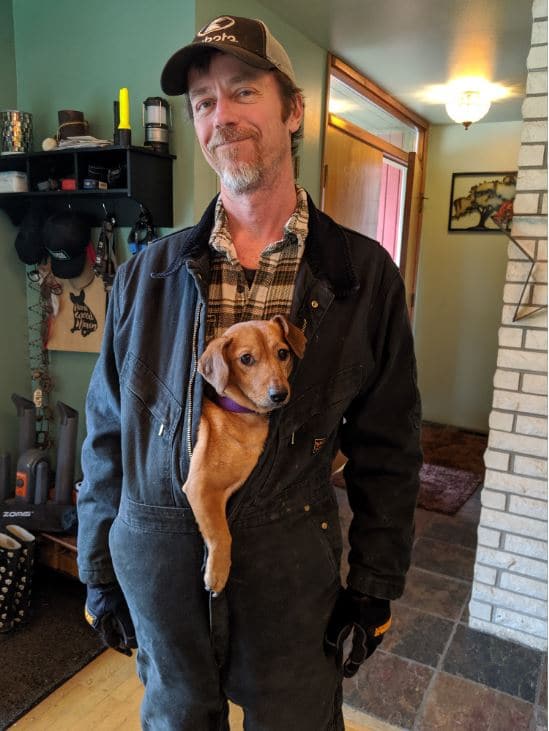 Penny is a Chiweenie (Chihuahua/Dachshund mix) who is about 13 years old. She is one of Matt and Sara Chaney’s fosters and loves to hang out in Matt’s shirt. Photo by Sara Chaney

While ODH only takes in senior dogs, it does not take dogs into its foster care system that it believes are permanently adoptable. This allows ODH to concentrate on the oldest and sickest dogs who will never be adopted from shelters, and those who need much more medical care than can be provided by shelters, owners, or other rescues.

“We have raised consciousness in western Washington about senior dogs in shelters so that most of those without major (i.e. expensive and life-threatening) health problems are adopted directly at least with our help,” Piper said, referring to its Facebook page and website.

“Our pages have a huge reach and mostly to people specifically interested in senior dogs, so we give a lot of exposure to a well-targeted audience,” Piper said. “In 2019 we posted 285 dogs for others [rescues, individuals, and shelters] and there were at least 225 adoptions.” 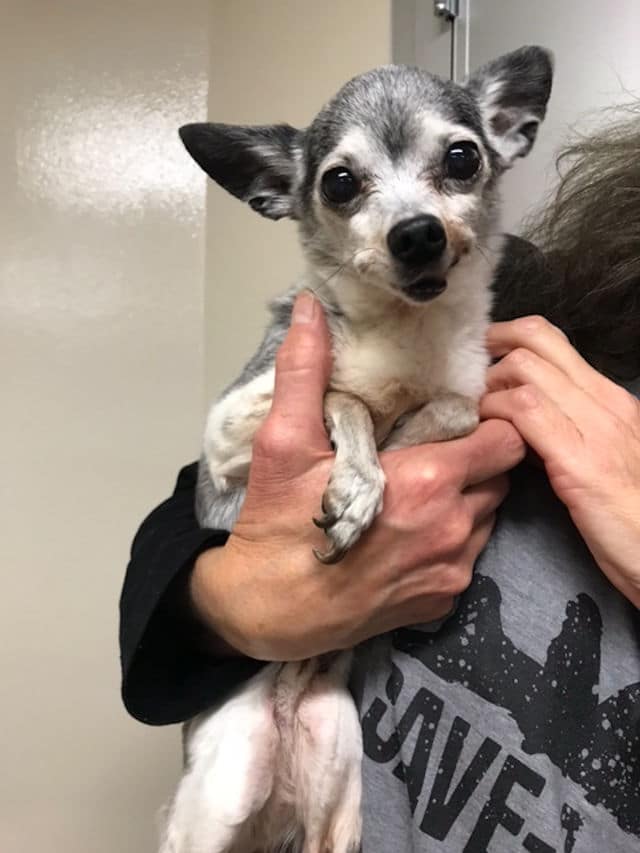 The oldest and sickest seniors are left for ODH. They are the ones who are so expensive to care for that most adopters are reluctant to adopt them, fearing the dog may only live for a short period of time, maybe only days.

One of those old dogs taken in by the organization is Paco, a very old, 5-pound stray Chihuahua who showed up at the local shelter. He had horrible dental disease (he has since had surgery), was very thin, and had very long nails. “He moved into his ODH home with a huge sigh of relief, climbed into his ODH mom’s arms and lap, and just slept from exhaustion—finally safe,” Piper said.

Another ODH dog, Ali, is a large, handsome boxer, who was found beside a road dragging a basketball-sized tumor from his ribcage. “When we picked him up he wouldn’t take even one step on a leash and didn’t respond much to humans,” Piper said. Urgent surgery to remove the mass changed Ali who slowly figured out that he could walk normally. Ali is thriving, healthy, mobile, loves people, and enjoys his life. 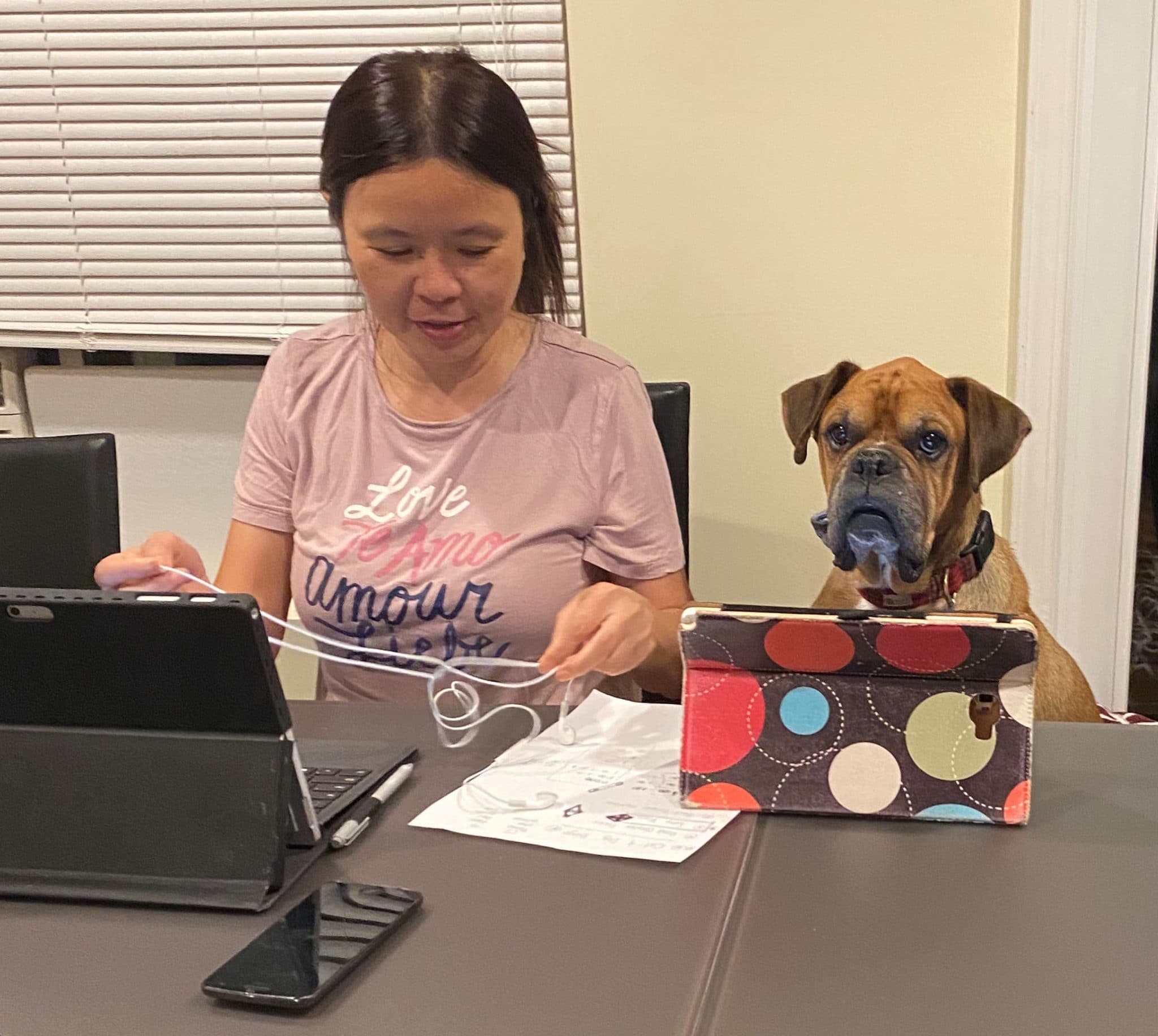 Ali enjoys helping his foster mom, a teacher, with remote classes. He was named after Muhammad Ali, the famous boxer. Photo courtesy of Old Dog Haven

Through their years of working with seniors, ODH has learned about the best ways to care for the ones who need them most. They also have an extensive network of trusted veterinarians. “It’s not an easy assignment for our foster parents but we all get so much pleasure from the process, even when it breaks our hearts at times,” Piper said.

The right situation is very important so that senior dogs don’t lose their homes. Piper said they counsel possible adopters to consider the following:

Since March when COVID-19 took hold, adoptions from shelters have been way up and ODH rarely had to cross-post for them, especially since in the early months shelters were closed to the public and they mostly stopped taking in owner surrenders. But Piper said their cross-posting is now starting to creep back up. “It’s been a strange time for adoptions and I just really hope that those shelter adoptions will ‘stick’ as folks go back to work or feel the economic pressure,” she said.

ODH is now bracing for the possibility of more seniors needing homes due to the economic fallout from COVID itself, although they have not experienced it just yet. Additionally, adopters going back to the office after working from home may find their dog can’t stay alone for long periods of time, and that’s where ODH may have to offer help. 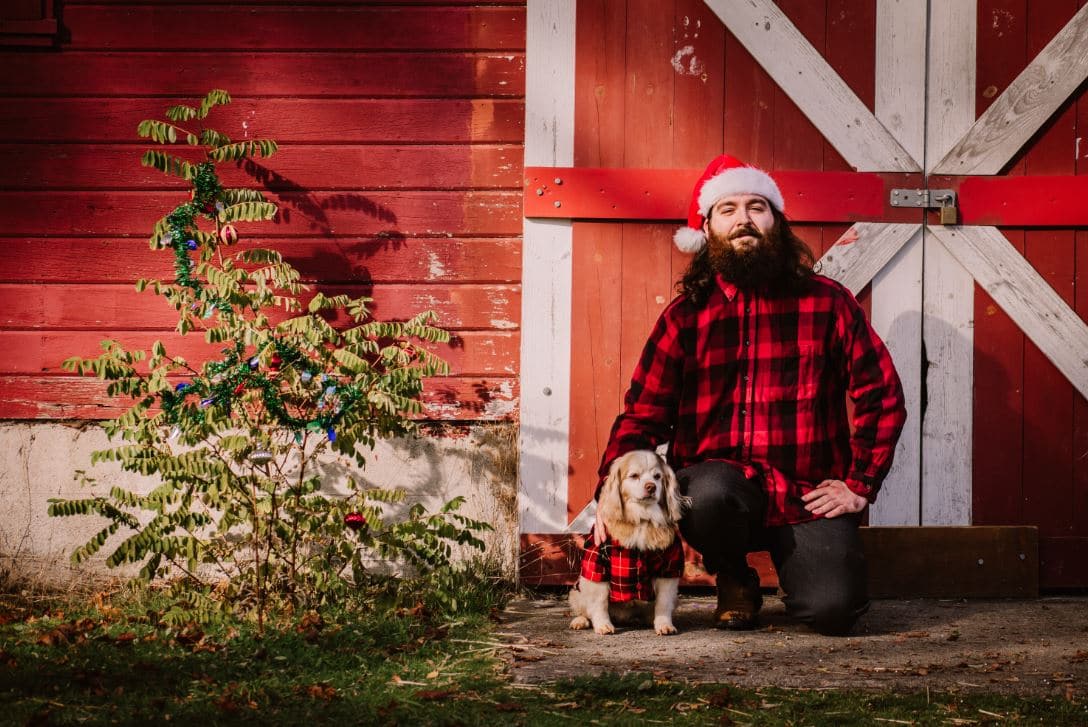 Sherlock, a Spaniel mix, has serious heart disease but a great attitude. Here he poses with foster dad Jacob for their winter season portrait. Half Moon Photography

While a senior dog may be more expensive to care for and typically won’t live as long as a younger dog, “their devotion, love, and companionship make up for it and you get the satisfaction of giving a great gift to a wonderful old soul,” Piper said. “There may be nothing more beautiful than a happy old dog.”

“If you have the right situation, can afford care (perhaps with an insurance policy), and want to enjoy what we think is the best part of a dog’s life—then do look into adopting a senior,” Piper said. People in western Washington who are interested in becoming a permanent foster can contact ODH.