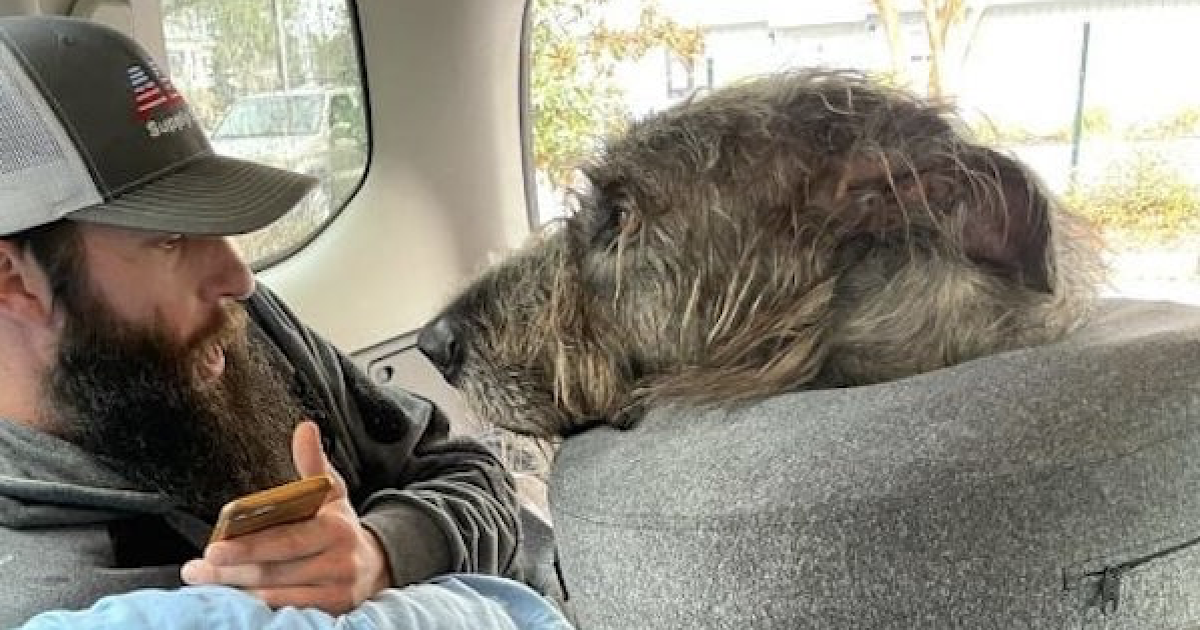 Not all heroes wear capes. While some families might turn away at the sight of tragedy, one couple turned toward it and saved the day. Merlin, the 160-pound Irish Wolfhound, was the victim of a hit-and-run in South Carolina. His dad, Zachary Corrado, sat beside him and cried out for someone to help.

Drew Kreiling and his wife Sharon Chuduakowski-Kreiling happened to be in the right place at the right time. They saw the dog get struck by a vehicle, so they drove over and blocked the road to protect him. Then, they went above and beyond to give the dog the medical care and funds he needed.

Corrado often walked Merlin on the beach without a leash, as it’s allowed there. No problems had ever occurred before this incident. But that night, when Merlin saw a fox, he was gone. Corrado tried to get his dog to calm down, but Merlin was in the road before he could stop him.

A truck hit Merlin, braked for a moment, but then sped off. Drew and Sharon witnessed the horrific event and sped to Corrado and Merlin as quickly as they could. The dog was in critical condition and had low odds of surviving. But Corrado, a complete stranger to the couple, looked up at them and begged for help. He said Merlin was his best friend and he couldn’t let him die.

As fellow dog parents, the couple knew how important this was. Other bystanders came to help as Corrado applied pressure to the wound. With quick-thinking, Drew and Sharon helped get Merlin into the back of a pickup truck and called the nearest vet for help.

“I knew time was of the essence. You know, I didn’t know if this dog was going to live, to be honest with you,” said Sharon.

Thanks to the help of many kind strangers, Corrado, Drew, and Sharon were on their way to the Animal Emergency Hospital of the Strand. Thankfully, they got all green lights on the way there, and they made it as Merlin continued to fight for his life.

Vets got to work on Merlin’s conditions, but ultimately, the quick-thinking saved his life. At the hospital, they essentially had to rebuild his leg and put a plate in his shoulder. But at least he will be able to walk again after this tragic incident.

“He had a plate, a pin put through his whole humerus, 16 screws and two wires to hold the whole thing together,” Corrado said. “It took upwards of six hours with two surgeons and two assistants.”

Procedures like that are anything but cheap though. Corrado had to max out his credit cards just to cover the $9,500 fees. But Sharon and Drew stopped by the vet often to check in on Merlin, and they could see how much Corrado was willing to give up for his dog. So, the couple created a Facebook fundraiser that raised enough funds for him to pay off his debt.

Merlin is now doing well and healing every day. No human should ever run off after hurting an innocent dog, but Corrado learned a lesson too. Keeping your dog leashed is important, no matter how well-behaved your canine is. Corrado and Merlin will be more cautious in the future to ensure that something like this never happens again.