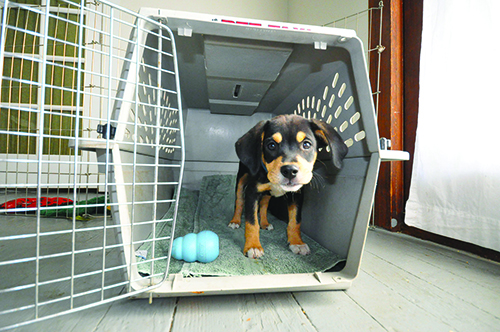 Dog owners tend to think of crates as safe havens for their dogs or puppies – a place where they can stash a puppy for a short time to keep him from chewing household items or chasing the kids. Even owners of adult dogs sometimes use crates to protect their dogs, preventing them from escaping the house or from getting into a fight with another dog in the house, as just a couple examples. The overall idea is that the crate is a place where the dog or pup will be safe while we need to take our attention elsewhere and are unable to supervise him for a short amount of time.

However, owners are often advised to give their puppies or dogs a toy, bone, or chewie to make being in the crate more enjoyable and to help pass the time. And if the item that is given to the dog or puppy is dangerous to his health, then that unsupervised time in the crate is absolutely not safe. It may, in fact, present a bigger danger to him than being loose in the house without the item.

If you will be walking away from your crated dog or pup, even just to take a shower or a Zoom meeting, your choices for a crate-safe chewie or food-dispensing toy are somewhat limited.

If the item you give your dog is meant to be chewed, it should be far too large for the dog to swallow, even after a good long session of chewing. Don’t give any dog something that can be completely chewed up to a swallowable size in less than an hour.

The problem, however, is finding items that are large enough. I have been dismayed, again and again, to see chew items designated for “large” dogs that are smaller than anything I would give to a five-pound Chihuahua.

Many of the chewie products on the market can be chewed up and swallowed by an aggressive chewer in 10 minutes or less. If your dog can chew the item to a swallowable size in less than an hour of dedicated chewing, it’s not safe to give to him unsupervised.

Lots of people buy dried beef “pizzles” for their dogs, and they are often sold in 12-inch lengths. But have you noticed that most dogs can chew these down to three or four inches within 15 minutes or so? At that point, these (and similar chew items) are in danger of being swallowed and causing the dog to choke! While a few dogs will keep chewing until the item is small enough to be safely swallowed, others will gulp it down when it’s definitely still long enough to pose a choking hazard if swallowed. For this reason, we wouldn’t recommend an item like this be used in a crate!

There is a single rawhide product on the market that I occasionally buy for my strong-chewing large dogs (about 70 pounds each) and for any puppies or adolescent dogs I happen to be fostering: Wholesome Hide’s 10-inch Retriever Roll. These chews are made in Illinois of a single sheet of very thick rawhide. It takes a lot of work to chew off small pieces of the rawhide to consume, which is good, because we don’t want any dog to consume very much rawhide in any one sitting. If Wholesome Hide made even larger rolls, I would buy those, instead, even for small dogs.  If it takes days of on-and-off-again chewing for my large dogs to reduce the product to the size at which I throw it away, it will take a small dog more than a week to do so – and that’s great! Providing something that is ridiculously large will slow the dog’s rawhide consumption and prevent choking.

We don’t approve of giving dogs dried bones – neither the sterilized, bleached white ones that are devoid of tissues or marrow, nor the decidedly not sterile, dried bones that have tissue still attached to them and marrow present inside them. The former bones are too hard; dogs invariably try to crack them open and are at a high risk of cracking their molars on them. While the latter bones are softer, they contain enough moisture to host pathogenic bacteria such as  Salmonella.

If you are going to give your dog a bone to keep him happy, it should be fresh (or fresh-frozen). Ideally, these still have tissue still attached to them; the act of chewing, licking, and tearing at these tissues is incredibly helpful for scraping plaque from a dog’s teeth.

Unfortunately, it’s difficult to find bones that have tissue still attached to them, unless you are lucky enough to have access to an old-fashioned butcher who still cuts up carcasses.  Industrial “big meat” practices utilize most bones for other purposes, and the few that do make it into supermarkets (and even commercial suppliers of raw diets who sell raw bones) usually lack these tissues.

Also, bones should be given only to dogs who have proven, thorough many supervised trials, that they can chew bones safely – not super aggressively, and not intent on quickly swallowing as much bone as they can. Even then, we’d give a large, fresh, meaty bone to an experienced bone-eating dog in a crate only if the crating period was not going to be more than an hour or so; bone-chewing should be supervised.

What about dried pigs’ ears and snouts, beef hooves, tendons, and all the other miscellaneous dried animal parts found in the pet store aisles? Nope. We wouldn’t give a dog any of these items in a crate when we are not close by and actively supervising. Too many of these items can be chewed to sizes that can be choked on in a short time.

Stuffing food into a toy such as the original Kong is the safest option for most dogs who benefit from having something in their crate to keep them occupied and happy.

By filling your dogs’ Kongs with canned food or a raw diet and then freezing the toy, it takes longer for the food to melt and for the dog to completely empty the toy. Or you can use kibble mixed with peanut butter, cream cheese, or yogurt – anything healthy and sticky enough to make the dog have to work at licking and manipulating the toy to try to reach and eat all the food.

However, you still have to make sure that the toy is of an appropriate size (too big to be swallowed) and toughness (chew-resistant), and that your dog will empty the food from the toy in a safe manner, not progressing to chewing the toy after the food is gone. Run a number of trials while supervising him to determine what type of food keeps your dog working at the task the longest.

There are many types of “food puzzles” (which require the dog to manipulate sliding covers or remove pegs to reach food treats) and balls or cubes that will dispense kibble when knocked around by the dog. These are not generally safe for most dogs to use without supervision, and certainly not appropriate for use in the close confines of a crate.

Nothing is 100% safe. We’ve heard of dogs who are able to chew up even the toughest Kongs – the black ones, intended for the strongest chewers. If you have one of these dogs, crating him with a scattered handful of kibble might be the only safe solution. It won’t last as long as some of these other options, but it will be the safest choice for him.