Many of us wonder what our dogs do when home alone. How is my young puppy handling the first few trials of being crated when I leave the house to head to the store? Does my adolescent dog endlessly pester my older dog? Is my ailing dog seemingly comfortable throughout the day? Does my dog really stand and bark at the window all day, as reported by my “cat-person” neighbor?

Thankfully, modern technology offers an easy, inexpensive way to make the otherwise secret life of our pets a little less of a mystery by using a wireless IP (Internet Protocol) camera. Fun Fact: “Wireless” refers to how the camera communicates, not how it’s powered. “Wireless” IP cameras all require access to an electrical outlet. (“Wire-free” cameras, which require batteries for power, are also available, but we didn’t include any of these in our review.)

There are plenty of inexpensive consumer-grade surveillance cameras to choose from, and each of the four in our review sell for less than $50. While all of these cameras proved to be competent at giving us a real-time look at how our test dog spends his days home alone, our concerns about the data security offered by home surveillance cameras led us to recommend only two of the four.

Experts say data privacy issues are the biggest risk associated with inexpensive cameras. In hindsight, we probably should have guessed that even a camera touting “financial-level encryption,” might not be as secure as we’d like, especially considering how often major credit card companies have their data breeched! We could find no information relating to the data security offered by certain products and, as a result, do not recommend those cameras.

One way to improve security when considering a wireless IP camera is to keep software and firmware up to date. This includes the app used to view the camera’s feed remotely, the camera itself, and even your router at home. (Experts say if your router’s manufacturer no longer offers firmware updates, it’s time to retire it for a more current model.) It’s equally important to choose a strong, unique password for your home WiFi system and to change it often.

Each of the four cameras in our test are quite similar, so picking a favorite came down to minor differences. It’s worth noting that none of the cameras support 5G WiFi, a faster WiFi that’s often found in Whole Home WiFi or Mesh WiFi systems and that have gained popularity as so many people work from home during the pandemic. If you’re on a 5G network, be sure to look for a camera with this specific capability.

In general, each of the four cameras operate the same way. Setup begins by downloading a proprietary app, pairing the camera to the app, and connecting it to a WiFi network. Setup for each of the four cameras was quick and easy. The app gives you real-time access to the camera feed, and, depending on your selected settings, will push text-based notifications when the camera detects movement. Users can also opt to manually record a video or take a picture of the scene while viewing the live stream.

Two of the cameras we reviewed automatically record short videos of motion events. These videos are saved within the app for a short period of time. The ability to capture longer motion events, or to preserve any motion event for longer than a few days requires the use of a micro SD card or a subscription to the manufacturer’s cloud storage system.

All four cameras feature 1080p resolution with varying degrees of app-controlled pan, tilt, and zoom capability as well as infrared night vision. They also feature two-way audio, allowing one to see and hear what’s happening at home and, if desired, communicate with those on-screen. Admittedly, I never once tried using the speaker to talk to Saber, our test dog; it just felt mean! But I did activate the speaker to make a loud noise in an attempt to (successfully!) interrupt some obsessive licking I happened to observe during a check-in.

Among the features that stood out to us are the option to use a hardwired Ethernet connection to support a more reliable network connection, and the presence of a screw hole on the camera base that fits a standard tripod mount. I found it easiest to mount the camera to a tripod when determining where to position the camera in order to capture the best view of the room.

Each of the cameras come with mounting hardware or can sit flush on a flat surface such as a shelf or table. Two of the cameras have the ability to integrate with Alexa or Google Assistant for voice control.

OUR WINNER, BY A HAIR 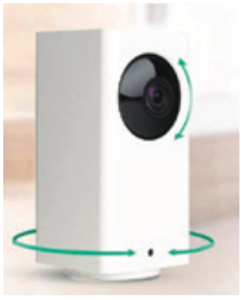 In considering data privacy and security issues, Wyze Cam Pan comes out on top for its detailed explanation of security issues and the company’s commitment to security, as outlined on the “Security and Trust” section of its website. Wyze uses symmetric and asymmetric encryption, consistent hashing, AES 128-bit encryption, and each camera has its own secret key and certificate to validate identity during connection.

The Wyze Cam Pan offers a full 360-degree range of left and right panning, 93 degrees of tilt and 8x digital zoom. Pan, tilt, and zoom can be controlled manually via the app while viewing the live feed.

The Wyze camera also has the ability to track motion. As long as the motion begins within the camera’s field of view, it will track the movement. This sounds great, but in reality, we found the tracking to be a bit jerky, not at all as smooth as represented on the company website. It’s also surprisingly noisy when panning – so much so that, for the first few days of its operation, our test dog eyed the camera suspiciously whenever it moved. However, if you’re looking to monitor the play style of two dogs who might be romping across the living room, the ability to track movement would be a plus.

If you don’t need the ability to track movement or pan/tilt via the app and can position the camera in such a way as to see enough of the room you wish to monitor, the original Wyze Cam with a fixed lens might be worth a look for its lack of motor noise and the company’s commitment to data security.

Wyze Cam Pan also gets high marks for its ability to record and temporarily save short motion events within the app (for 14 days, for free) even without a cloud storage subscription, as well as for the most economically priced subscription plan at just $1.99 per month or $15 for a year.

I was surprised by one of the best features of the Wyze Cam when I received two “noise-detection alerts” via text message from the app one day when I happened to leave Saber home (he often accompanies me to work). A 12-second video from the camera was attached to the text.

One of the alerts was Saber barking, presumably at the mailman dropping mail into the building’s mail slots, which are right underneath my window. The other one was when a loud ambulance went down the street. If someone owned a dog who was accused of excessive barking, or if you owned a dog with separation anxiety, this would be a really cool feature. The text alert could prompt you to turn the camera on via the easy-to-use, intuitive app and check to further investigate what was going on at home at that moment.

If we had to fault the camera for anything, it would be the omission of a port for a hardwired connection, as sometimes WiFi can be spotty, and the overall noise of the device motor when panning.

SUCH A CLOSE SECOND

The Wansview Wireless Security Camera is similar to the Wyze product in terms of overall functionality. The range of view is slightly less than that of the Wyze, at 320 degrees of pan, 80 degrees of tilt, and a 4x digital zoom, but that was more than enough to see everything we needed. Like the Wyze Cam, the Wansview product may be turned on or off via the app. It is compatible with Alexa.

The Wansview doesn’t track motion, but does record short, 10-second event videos upon detecting motion, then pushes an alert with access to the video, even without a paid subscription. Videos are stored locally in the app for 48 hours, during which time they can be shared to your phone’s photo app for permanent storage. Users can also use the notification as a prompt to access the live feed to see what’s happening in real time.

Setup was simple using the app, and the camera easily attached to a tripod so I could position it as needed, so long as I stayed within the six-foot length of the power cord. Like Wyze Cam Pan, the Wansview camera lacks an Ethernet port for a hardwired connection, so I’m grateful to have experienced a consistent WiFi signal throughout the test period.

The only statement we could find about Wansview’s data security was the claim of“financial encryption technology” in its Amazon listing. We emailed the company for more information, and a couple days later, received this reply: “Wansview applies dynamic token, SSL, and https to protect the security when connecting camera to WiFi and using camera on app.”

All things considered, both products have strengths and weaknesses. I disliked the jerky motion tracking and noisy motor on the Wyze Cam Pan, but I liked its noise-detection feature very much. I preferred the Wansview camera, but its cloud subscription is considerably more expensive.

For my needs, the ability to simply check in on my dog when he’s home alone is enough. I don’t really need lengthy recordings of his activity. If a cloud subscription was important, I’d be inclined to lean toward a Wyze camera product for the far more budget-friendly subscription fee.

We chose the final two cameras for our reviews – the Conico Pet Camera Monitor and the Kamtron Wireless IP Camera – based on their popularity on Amazon and because they each sell for less than $50. They both performed fine, but, when cybersecurity is considered, it’s bothersome to be unable to find any references to how one’s data may be secured. One company (Kamtron) doesn’t even appear to have a functioning website address.The Kamtron camera’s user’s manual lists only a Hotmail account as an email address and not a company website.

Also interesting is that both cameras utilize the same app. In terms of functionality, they appear almost identical, the only difference being the Conico camera tracks motion.

We did observe the motion tracking to be quieter than that of the Wyze Cam Pan. Both cameras offer 360-degree panning and 100 degrees of tilt. The Conico camera was the slowest off all four products to respond to swiping gestures when trying to pan or tilt via the app.

At a time when much of our life is entwined in electronic data, it feels even more important to go the extra mile to ensure our safety and protection when entrusting even more of our life to an electronic device. As such, we can’t in good faith recommend these two cameras, and we were happy to quickly unplug and box them up after a short test run. Lesson learned: A high Amazon ranking does not a responsible purchase make! 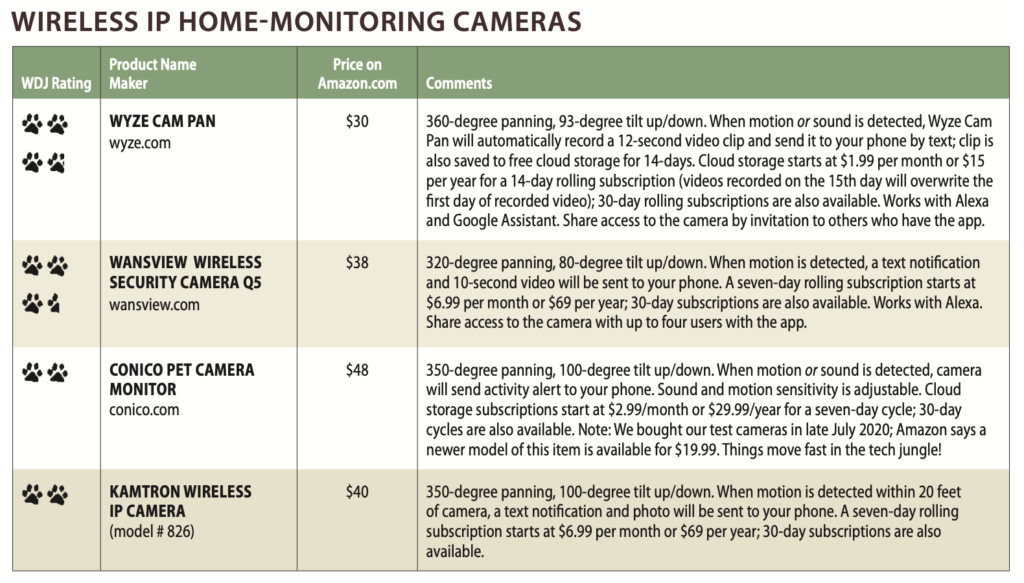