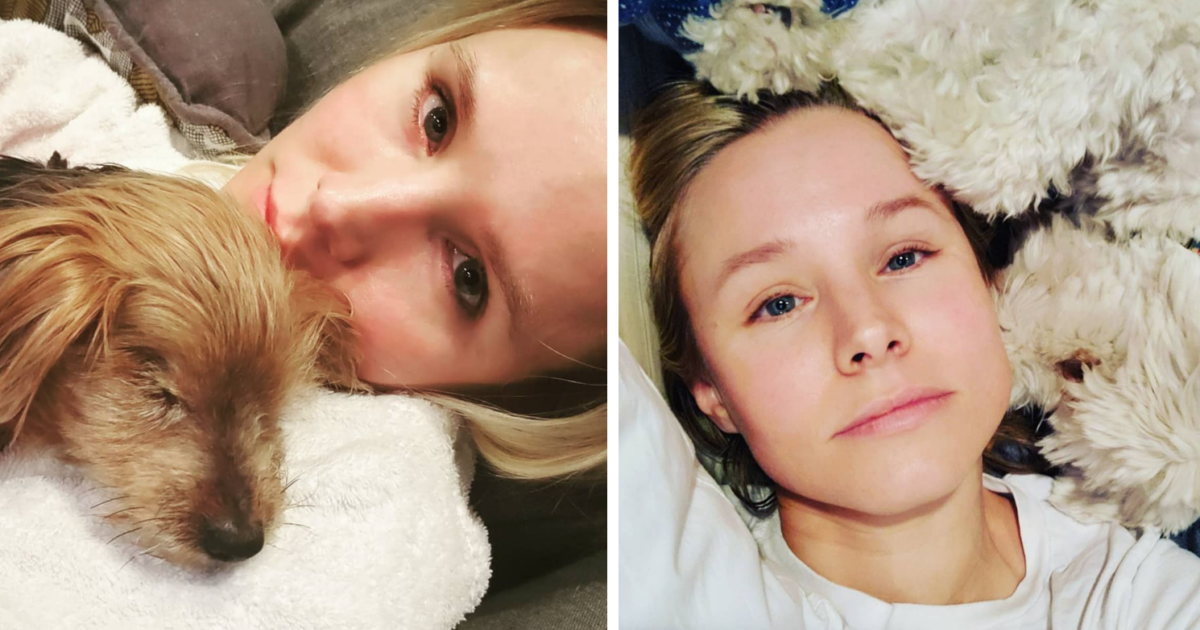 You probably recognize Kristen Bell from her many notable film and TV roles. Did you know the star of Disney’s Frozen and NBC’s The Good Place is also a huge advocate for dog rescue? She currently has two pups: 3-year-old Frank, a rescue from The Dog Cafe in Los Angeles, and 2-year-old Whiskey, a dog who lost one of his legs after a truck hit him.

In a recent interview with USA Today, the actress described dogs as “nature’s antidepressants,” saying she loves the way her rescue pups make her feel.

“When I’m responsible for caring for an animal, it gives me a lot of self-esteem. I gravitate towards dogs so much, I think because they’re nonverbal, and sometimes I feel I can’t always find the words.”

Bell has rescued many dogs prior to these two, including Sadie, a senior dog saved from Hurricane Katrina who lived to be 17. She’s also a frequent foster parent. Her stance on rescuing shelter animals over adopting dogs from breeders is pretty explicit. She once told People:

“There are so many wonderful pets in shelters around the country ready and waiting to find a home. If they don’t get adopted, they get euthanized. So breeding more animals just doesn’t make sense to me.”

Recently, she appeared in a “Pup Close And Personal” segment as part of the Puppy Bowl event that aired on Animal Planet. She got to spend the day looking after Java, a puppy athlete found abandoned in a box in the California desert. Her favorite part?

“Java loved to cuddle up, and had that rambunctious puppy energy and delicious puppy breath that I love so much.”

Everyone loves puppies, and they’re always the first to go from shelters. Bell says she likes to adopt older dogs who might have a harder time finding homes.

“I will foster puppies, but when I adopt, they tend to be older dogs, especially seniors, because I feel I have the ability to care for a senior who might have a special need.”

Her most recent senior rescue Barbara passed away in October 2020. Bell shared on Instagram that though she was heartbroken, she felt blessed to be able to make Barbara’s last two years happy ones.

She also acknowledges her ability to provide an excellent home for any dog. Since senior dogs are so often overlooked, she loves being able to bring them joy in their golden years.

“For me, knowing I can provide comfort for an old guy or gal that would otherwise be in a shelter or possibly get put down, it just makes me feel good. I desperately want to promote happiness and reduce suffering, and allowing these seniors to live in my house and just sit on their dog bed all day and once in a while mosey on over to the food, it’s a pretty easy way to provide comfort.”

Bell Always Has A Big Family

Bell was rescuing dogs long before she got married. For her husband [actor Dax] Shepard though, living with animals took some adjusting to. He also suffers from dog allergies, which of course, doesn’t prevent the actress from adopting.

“Dax did not have any pets growing up, so when they would run through the living room, he would be visibly startled, as if squirrels were running through the (house). He still doesn’t understand why we cohabitate with animals, but I don’t need him to understand it. I just need to get hypoallergenic dogs so that I don’t asphyxiate my husband.”

Her young daughters, she says, enjoy the responsibility of looking after foster dogs and family dogs too. Especially since new dogs are constantly coming to stay.

Between her love of all pups no matter their age and her support of the #AdoptDontShop movement, Kristen Bell definitely tops the list of celebrity dog people!