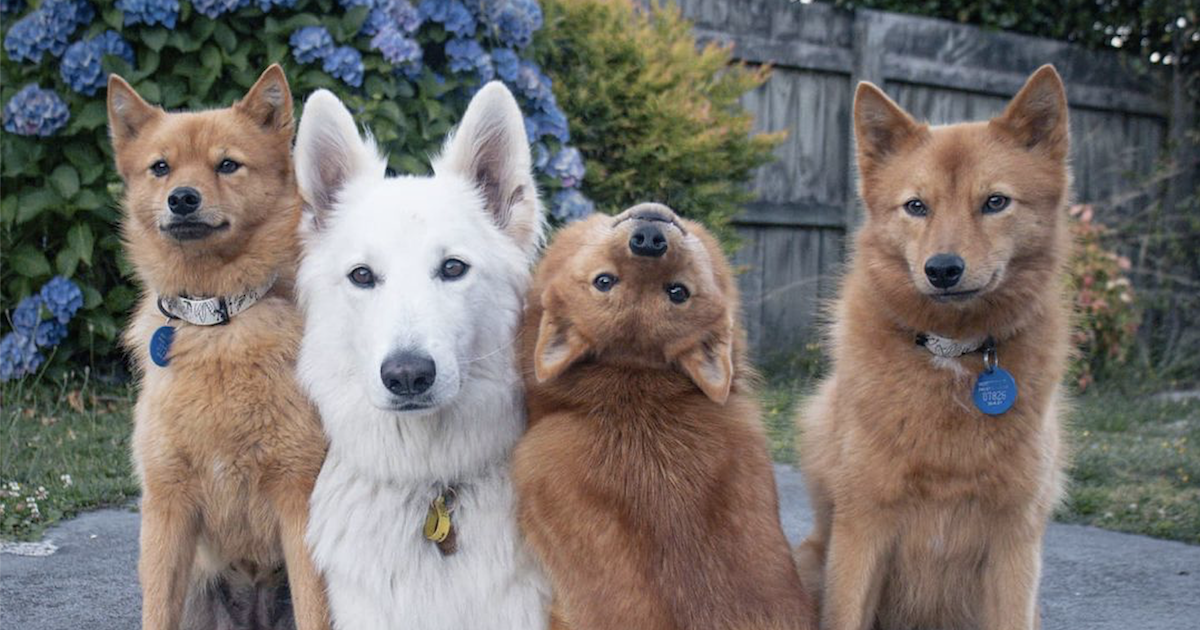 Kiko the 9-month-old Finnish Spitz is part of a photogenic canine family. She lives with two other Finnish Spitz named Tofu and Mika, a White Shepherd named Kaya, and a Black Shepherd named Hades. All five love to pose for pictures on Instagram, but Kiko’s poses are a bit more interesting.

If Kiko’s back is facing the camera when the picture is taken, she flips her head upside down 180 degrees, making her look like the possessed girl from The Exorcist. But this isn’t a horror movie, and Kiko sure isn’t scary. In fact, her silly pose is one of the cutest things you’ll see all day!

Don’t worry; Kiko’s head trick doesn’t hurt her in any way. In fact, she chooses to do it. Her mom Ashleigh Macpherson said that it started with Kiko sleeping with her head in weird positions. Then, the pup started flipping her head that way to look at other dogs.

Now, when Macpherson tries to take group photos of her dogs, Kiko always seems to end up upside down. Instead of just turning her whole body around, Kiko finds it easier to rotate her head like a mixed-up owl. After all, it’s more amusing that way!

“When people see her do it in public, their reactions are always the same. They look shocked at first and ask; ‘how does she do that?’, and then you can see them smile and laugh afterwards,” said Macpherson.

Kiko’s trick is a little unsettling at first, but she certainly isn’t from a horror movie. It’s just that her neck is extra flexible. Maybe this bizarre pose is even comfortable for her.

Kiko seems to be that “one friend” who can never take a serious photo. She’s the youngest in the family, so she can’t help but add some humor to every situation. Before she came along, Tofu used to scream whenever Macpherson tried to take a photo.

Silly little Kiko was born not long after the coronavirus lockdown in New Zealand began. Macpherson said she’s grateful that she had Kiko’s silly personality around to make 2020 go by a little faster. She also thinks Kiko might be so unique because she was born during such a crazy time.

“Her company made me enjoy the time I had in lockdown,” Macpherson said. “She is quite a laid back, cuddly, sweet, and a loving dog. But she is also sassy, playful, and can have a lot to say.”

Macpherson also noted that Finnish Spitz are a very vocal breed. Kiko and Tofu are especially talkative and want to make sure they always get enough attention. Luckily, Kiko’s silly poses are the perfect way to get people to notice her. So, it looks like she won’t be stopping anytime soon!